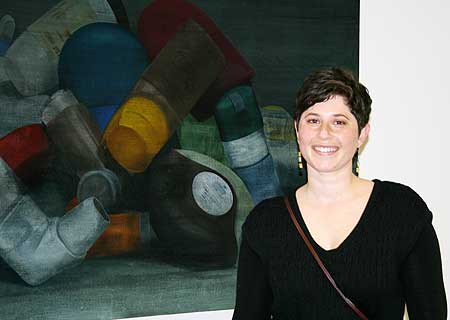 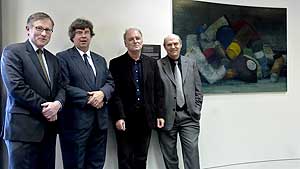 A tribute to life-saving asthma research captured in a painting by a final-year Massey student was officially launched yesterday at Otago University’s Wellington School of Medicine library.

Keila Martin’s work, Inhaler Pile, celebrates the determination of four researchers who worked to prove asthma drug fenoterol was the cause of increased asthma mortality in New Zealand in the 1980s. The researchers involved were Professor Richard Beasley (NZ Medical Research Institute director), Professor Julian Crane and Professor Carl Burgess (both department of medicine at Otago’s school of medicine in Wellington), and Professor Neil Pearce, who now heads up Massey University’s Centre for Public Health Research.

Wellington’s Schaverien family commissioned the painting. Jane Schaverien, whose daughter Polly was severely affected through the use of fenoterol, described the researchers as “four heroes who fought a dragon”.

Mrs Schaverien believes the work saved her daughter’s life, as well as the lives of many others. She hopes the painting will inspire future researchers.

The four researchers formed the Wellington Asthma Research Group at the school of medicine in 1988.
Their work forced the eventual withdrawal of fenoterol, despite strong opposition from the pharmaceutical company manufacturing it, and many medical professionals.

Ms Martin, who is set to finish her Bachelor of Fine Arts majoring in painting at Massey’s Wellington campus this year, says Inhaler Pile reflects her admiration of the researchers’ work.

“The intense research process was quite a key idea for me,” Ms Martin says. “It was my first commissioned work and quite challenging. I am quietly pleased with it.”

The head of Massey University’s School of Fine Arts, Professor Jeremy Diggle, who coordinated the competition to find an artist to work on Mrs Schaverian’s commission, was also at the launch.

Professor Pearce wrote a book, Adverse Reactions: The Fenoterol Story, about the research.