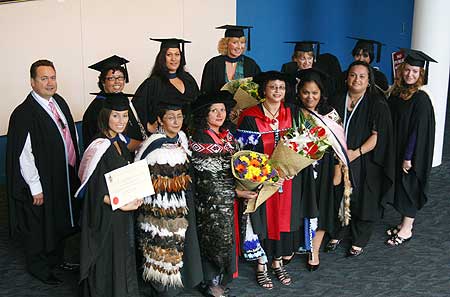 New Zealand needs people who can interpret the evidence from what they read or hear, Associate Professor Cindy Kiro told recent Mäori graduates from the Albany campus.

In her speech to the special ceremony for Mäori graduates last week, former Children’s Commissioner Dr Kiro, who now heads the University’s School of Public Health, criticised the way in which some mainstream New Zealand news media portray Mäori.
“If we were to believe everything we read, we’d think Mäori were bad, sad or mad,” she said. "Mäori are portrayed in stereotyped ways in the mainstream media."

She said many in the media created and dwelt upon stereotypes of Mäori being unemployed bludgers who smoke and drink too much. Rather than accepting the stereotypical views presented in the media, she encouraged the graduates to "meaningfully filter information and act on solid evidence – this is the reason a good education is so valuable in today’s world”.

Deputy Vice-Chancellor and Assistant Vice-Chancellor (Mäori and Pasifika) Professor Sir Mason Durie congratulated the graduates, their friends and whänau who helped them get to the next step in their academic pathway, making special mention of the two Mäori PhD graduates, Dr Virginia Warriner and Dr Lily George, who are the first of 12 Mäori PhDs to graduate during the Massey graduation season over the next six weeks.

He acknowledged the role Waikato University Professor Emeritus Tamati Reedy played in the past quarter century, a period of transformation for Mäori. Professor Reedy, a former head of the Maori Affairs Department (now Te Puni Kökiri), was at the ceremony to support his niece, Dr Warriner.

Sir Mason said Professor Reedy had made a significant contribution to many areas of development, including education, health, te reo Mäori, television and radio. “This year is a good year to graduate," Sir Mason told graduates. "It is the beginning of a new decade, a new generation. Twenty-five years ago the hui taumata was held. It heralded a new direction for Mäori development. Our people need new triumphs – the future is in your hands."

Dr George (Ngä Puhi) received heartfelt thanks from many of the other graduates who had been mentored by her in her role as postgraduate advisor to Mäori students or tutored by her since she began working at the campus in 1998. She started studying at Massey 1995, graduating Bachelor of Arts in 2000, followed by an honours degree in 2002, after which she began her PhD research. Her thesis centres on the history of Awataha Marae in Northcote.  “I became part of the Awataha community in 1997. The following year I was asked by one of the kuia to write the history of the marae as a master's project.” She says she soon realised the “magnitude” of her task, so expanded the project to a PhD. “Awataha is unique in many ways, yet also very much tied to Mäori traditions,” she says. “It is a pan-tribal marae, begun on the philosophy of biculturalism with kaupapa Mäori as a base.” Chapter four of Dr George’s thesis contains the specific history of Awataha Marae from around 1961, when the North Shore Mäori Tribal Committee first started talking about building it, until 2005.

For her doctoral thesis Dr Warriner (Ngäti Whätua, Ngäti Porou) investigated how Mäori businesses in the creative industries internationalise their products and services. Companies involved in advertising, computers, publishing, broadcasting, film and video, architecture, design, music, performing arts and visual arts were included in the research. She identified 10 themes and from them selected “uniqueness of a product" as the most important driver for exporting. Mäori tikanga [customs and practices] were also relevant as a driver, she said. “These presented challenges when incorporated with everyday mainstream practices.” She recommended Mäori businesses should continue creating unique products and target international niche markets. “Government needs to reassess their support policies and provide initiatives appropriate to micro and small businesses in the creative industries. There is also a need for government export agencies to better understand and market the uniqueness that Mäori and their productions offer to the international arena.”

In April and May more than 380 Mäori will graduate, almost 30 per cent with postgraduate qualifications. There are more than 3000 Mäori students enrolled at Massey, more than 70 in doctoral programmes.

At the Manawatu graduation ceremonies next month, eight Mäori will be conferred with PhDs. Of special note will be the capping of the University’s first Mäori midwife PhD and the first Mäori clinical psychologist to obtain the Doctor of Clinical Psychology degree. Later in the month at the Wellington ceremony, the last of the 12 Mäori PhDs will graduate. Simon Bennett developed and trialled a cognitive behavioural therapy for Mäori with depression.

Maths teaching not a zero-sum game
Decide, plan and act for success
Tears, songs and challenges at Maori ceremony
Reducing symptoms of depression among Maori