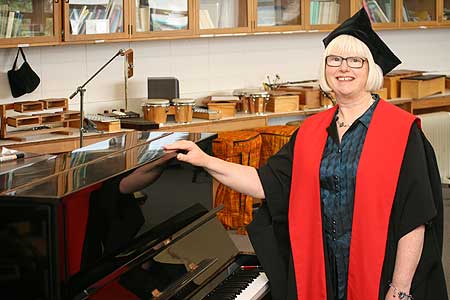 Daphne Rickson who graduates with a PhD in Music on Tuesday.

The benefits of using music as an everyday tool when teaching disabled children have been demonstrated in research by Daphne Rickson, the first PhD graduate from the New Zealand School of Music – a joint venture between Massey and Victoria universities.

A lecturer in music therapy in the school at Massey's Wellington campus, she has worked with teams supporting four primary school-age children with very high special needs in South Canterbury, the West Coast, the Bay of Plenty and Hawke’s Bay.

She spent a week at each school, showing the teachers and teacher aides working with the disabled student how to include music in activities and daily routines, and provided a term of follow-up support to ensure the strategies were cemented in classroom programmes.

Mrs Rickson says using music made a tangible difference to the relationship between team members and the student. “A big part of it was that the team members felt more motivated and optimistic as a result of using music in their teaching and care giving. They were able to communicate better with the student once they had learned strategies like taking the lead from the student and going a bit more slowly to allow time for a response.

“As a result they became more positive about the student, and expected and got more from them.”

One example was a student who constantly got up from their desk and moved around the classroom. “The teacher made up a ‘sitting at your desk song’ and would sing it to the child whenever they weren’t at their desk. Within a few weeks, the student was remaining seated for much longer periods.”

Mrs Rickson says giving team members confidence in their musical ability was one of the challenges. “People think you have to be talented to make music, but that is a socially constructed view. In many cultures, music is as natural as talking, and dancing as natural as walking.

“Some of the team members were self conscious at the start but the positive results made them bolder, together with the fact that other children in the classroom did not make a big deal of it. Children at that age don’t judge; they just love the sounds.”

Many of the research participants told her the music strategies would be helpful for all students, not just those with special needs. “Music motivates and is a great form of emotional expression. It also keeps a group together—a class of children that is marching and singing is more contained.”

Former Massey University Chancellor Morva Croxson, who was instrumental in getting the music therapy course established at the university, says it is significant that Mrs Rickson has achieved all her qualifications within New Zealand, whereas previously music therapists felt they had to travel overseas to obtain the desired quaifications.

“Music therapy is becoming a recognised discipline in its own right,” Mrs Croxson says.

Mrs Rickson believes her approach to music therapy, of spending intensive time with the team followed by ongoing support, is a formula that would work well in other specialist areas. “You have to build a rapport with the team and see what they do day-to-day to find out how best they can include new strategies in their routine. Going to a seminar for a few hours would be much less effective.”

Her degree will be conferred at the Victoria University graduation in the Michael Fowler Centre on tomorrow.

The NZSM offers the only Music Therapy University degree programme in New Zealand. The NZSM PhD degree is granted jointly by both Victoria and Massey University. Visit www.nzsm.ac.nz for more information.