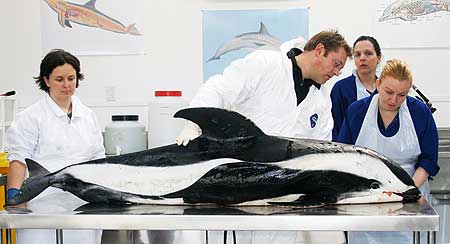 A rare hourglass dolphin underwent a post-mortem on Friday at Massey's Coastal-Marine Pathology Unit at Albany. It is one of only a handful of carcasses of the species ever examined by scientists.

Marine ecology lecturer Dr Karen Stockin, who headed the post-mortem, says the carcass is thought to be only the second in 150 years to be stranded on the New Zealand coast. The 1.7m, 78kg male was found dead at Flea Bay near Akaroa on Sunday, September 5.

Department of Conservation staff first thought it was a dusky dolphin, but when the refrigerated carcass arrived at Massey's pathology unit in Auckland on Thursday, Dr Stockin was shocked to discover it was actually an hourglass dolphin, a species rarely observed in New Zealand waters.

"Having access to this carcass is incredibly exciting for us as so little is known about these animals, their diet and biology," Dr Stockin says. "This is a once-in-a-lifetime opportunity for us to collect detailed data and to add significantly to the scant knowledge of this species."

Hourglass dolphins are polar, and normally found in Antarctic waters. They rarely venture out of the Southern Ocean to the south of the South Island, says Anton van Helden, marine mammals collections manager at Te Papa Museum, who flew to Auckland to assist with the post-mortem.

Researchers will collect baseline biological data from the carcass via a thorough examination of all organs, from teeth to tail stock. Tissue samples will be sent to Massey's veterinary pathology laboratory at the Manawatu campus for further testing. It is hoped the preserved organs can be held at Te Papa for future studies of the animal's anatomy.

Hourglass dolphins, also known as the skunk dolphin, Wilson's dolphin and Southern white-sided dolphin, are easily distinguished by their unique white "hourglass" marking along the length of their mostly black bodies. Findings of the post-mortem and of a CT scan will be written up for publication, Dr Stockin says.