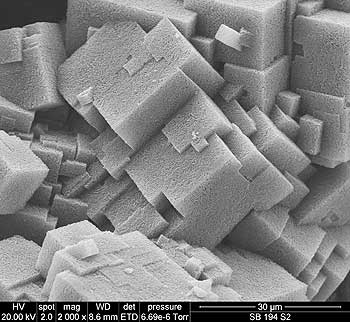 Postdoctoral fellow Sivakumar Balakrishnan, with senior lecturer Dr Shane Telfer from the Institute of Fundamental Sciences and Professor Alison Downard from the University of Canterbury, have won first prize in a competition held in Christchurch at the end of August to find the best images from nanotechnology research.

After judging by a panel comprising leading figures from the worlds of both art and science, the winners of the competition were announced by the MacDiarmid Institute for Advanced Materials and Nanotechnology.

Their $1000 prize-winning image of nano-sized crystals impressed competition judges who commented that it is reminiscent of cubist paintings by Picasso.

Nanotechnology involves the control and manipulation of materials on an atomic scale. One nanometre is one billionth of a metre, or one hundred thousandth of the thickness of a human hair.