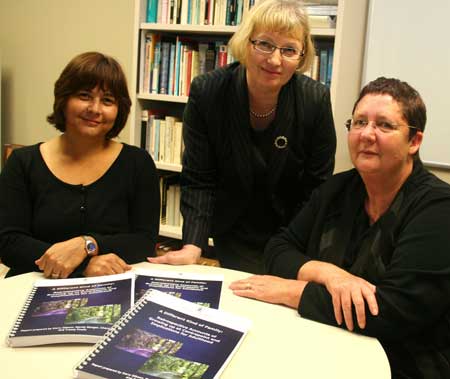 A three-year study involving a group of children in Auckland's Centrepoint Community from 1977-2000 has revealed the extent of abuse and its ongoing effects on their adult lives.

A 260-page report by a research team from the University's School of Psychology was made public today.

The psychologists, Dr Kerry Gibson, Dr Mandy Morgan and Cheryl Woolley, were commissioned by a trust set up by a High Court order a decade ago to manage the Centrepoint assets after the commune was disestablished and its "spiritual leader", Bert Potter, had served jail sentences for drugs and child sex offences.

Centrepoint is described as an "intentional community" – a term that embraces cults and non-cults to describe people drawn together through shared principles in a communal environment. Centrepoint was based on therapeutic encounter groups popularised in California in the 1960s promising social transformation by encouraging open communication. At Centrepoint the open philosophy included sharing toilets, showers, sleeping quarters, and open sexual relations among adults and children.

The report, based on interviews with 29 men and women, now in their 20s, 30s and 40s, looked at their experiences of growing up at Centrepoint, including how psychological manipulation, neglect, sexual abuse and drug taking affected them at the time and subsequently. About 300 children lived at the Centrepoint in Oteha Valley Rd, Albany, over the 22 years it operated.

The qualitative study, titled A Different Kind of Family: Retrospective accounts of growing up at Centrepoint, and implications for adulthood, contains testimonies from some of the 29.

Researchers reported a variety of experiences, both good and bad. Participants spoke of how their being given drugs and coerced by adults into having sex either with other children or with adults made it difficult for them to adjust to life since they left the community. However, some also reported positive effects, such as developing resilience, independence and good social skills.

The study authors say while the court cases and related allegations attracted considerable public attention, little has previously been revealed about what it was really like for the children who lived at Centrepoint and how their experiences continue to affect them.

Some of the key findings are:


The study says most participants agreed it was common for young people to have sex for the first time between the ages of 11 and 13. Boys "propositioned" by older women found it easier to resist unwelcome advances, while sexually abused girls – some as young as 10 – were "idealised" in the community as "being in touch with their loving".

"From the perspective of some participants, sexual abuse was widespread at Centrepoint. For others, though, the way in which sexual activity was valued and normalised...led them to doubt the incidents they witnessed or experienced were abusive at the time," the report says.

Many expressed anger at the passivity and lack of responsibility shown by their parents, with one woman recalling being chastised as a teenager for "shaming" her mother after she challenged Potter's lewd suggestions.

One participant is quoted, saying: "What's really fascinating to me is how reasonable human beings, adults, can suddenly alter their thinking in a way that allows them to normalise abhorrent behaviour...why are people more comfortable doing nothing when they know something is so terribly wrong, than get uncomfortable stopping it."

For some the impact on them was as a result of witnessing what happened to other children. A woman said she felt "sick" after resisting Potter's sexual advances then watching her sibling engage in sexual acts with him. She said she later learnt that Potter blackmailed children into having sex by threatening to separate them from their families.

The study authors say the varied experiences of the participants reflect changes during the 20 years the community existed, from its initial phase when "open communication and sexual practices appeared to have dominated the life of the community..." and included children and underage adolescents as both observers and participants in sexual practices. A second phase revolved around a greater use of drugs, and in its last years, sexual activity and drug use declined as a result of police raids, interventions by welfare agencies and the threat of dissolution of the community.

The researchers were told of former community members who now avoided all contact with other former members as a result of the damage they had apparently suffered, which they say "raises the possibility that some of those worst affected by their experiences chose not to participate in this research".

"There were, however, others that valued their sense of belonging at the community, and who miss their childhood home."

Although participants spoke about traumatic experiences, some felt strongly that they had experienced good things, such as the value of having contact with a wide range of adults and children and learning more open communication, and gaining independence and a good work ethic.

The study's authors say that recognising and respecting those quite different experiences was one of complex aspects of the research. They say a flexible package of responses is needed to meet the needs of former Centrepoint children and help some of them cope with ongoing psychological, substance abuse, financial management problems, life skills deficits, educational and career issues and justice as well as housing and health needs.

"The publicity around Centrepoint made it difficult for people to feel they could talk about their experiences," says Dr Gibson. "A better understanding of what it was like to be a child at Centrepoint will be useful for health professionals and the broader public to respond more sensitively to the needs of former members of the community."

The New Zealand Communities Growth Trust, which was established by High Court order in 2000 to manage the former community's assets and is administered by the Public Trust, commissioned the study. It hopes to use the findings to help determine what further assistance it should provide the beneficiaries.

Study authors: Dr Kerry Gibson is the Director of Massey's Centre for Psychology in Albany. She is a clinical psychologist with extensive experience in trauma work with adults and children.

Dr Mandy Morgan is an Associate Professor in Critical Psychology and head of Massey's School of Psychology. She is currently involved in a research programme on domestic violence services and interventions.

Cheryl Woolley is a senior lecturer in the School of Psychology, and is coordinator of clinical training at the Manawatu campus. She is a clinical psychologist with extensive experience in sexual abuse research.
To see the executive summary:
https://www.massey.ac.nz/massey/fms//Massey%20News/2010/05/docs/CP_exec_summary.pdf
For the full report, click on the following links
https://www.massey.ac.nz/massey/fms//Massey%20News/2010/05/docs/Centrepoint_Report_2010.pdf