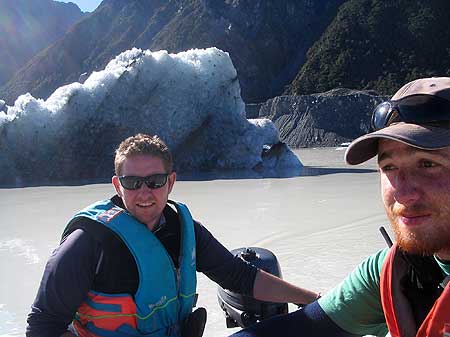 PhD student John Appleby (left) and Honours student Rob Dykes in a boat on the lake measuring depth with an echo sounder.

Watch the ONE News - TV3 News and Sunrise items The Tasman Glacier is retreating faster than ever and will ultimately disappear, glaciologists are warning.

In 1973 there was no lake in front of the Tasman Glacier, says Dr Martin Brook, lecturer in physical geography in the School of People, Environment and Planning. New measurements taken last week indicate the lake, formed by ice melt from the glacier, is now 7km long, 2km wide and 245m deep. The lake has been formed as the ice which makes up the glacier melts.

“In the last 10 years the glacier has receded a hell of a lot,” Dr Brook says. “It’s just too warm for a glacier to be sustained at such a low altitude, 730m above sea level, so it melts rapidly and it is going to disappear altogether. Significantly, the deeper the lake, the faster the retreat of the glacier.”

Dr Brook says the lake can only grow to a length of about 16km, which would mean a further 9km of glacier retreat.

“Using the empirical relationships between water depth and glacier retreat rate we could expect further retreat of between 477m and 822m each year. At these rates it would take between 10 and 19 years for the lake to expand to its maximum.”

His work indicated that an extreme scenario for the future retreat of the Tasman Glacier, developed by Dr Martin Kirkbride in the 1990s, was correct.

“The last major survey was in the 1990s and since then the glacier has retreated back 180 metres a year on average. This has exposed a huge rock basin which was eroded more than 20,000 years ago when the glacier was a lot larger and more powerful.”

Dr Brook and a number of research students are studying the glacier and the lake using a new towfish sonar and echo sounding equipment to measure the depth and analyse sediments under the lake.

“The glacier followed a slow retreat phase for a while, in that a thermo-erosional notch in the ice cliff face would develop at the water line, melt back into the glacier undercutting the ice above, causing the ice to collapse into the lake.

“But what is happening now is that a short foot of ice is extending out into the lake away from the ice cliff, and the glacier is now in a period of fast retreat. This is because as the water depth increases so does the speed of retreat – simply, a much larger part of the glacier is submerged and the water, even at only two degrees celcius, is still able to melt the glacier ice.

As well as addressing the future of the Tasman Glacier, which is in Aoraki Mt Cook National Park, the team is analysing the newly exposed sub-surface landscape. The project is also interested in the glacier because it is very different to the clean-ice glaciers on the West Coast. Tasman is covered in rock and debris, and has a different relationship with climate, Dr Brook says, as well as different patterns of retreat.

“In particular, although there’s a near-vertical ice cliff at the front of the glacier that terminates in the lake, there’s actually a sub-surface apron of ice that slopes away under the water for at least 50m or 60m from the front of the glacier. As this ice-apron melts, blocks of ice break off and float to the surface. This happens pretty quickly and is potentially a hazard for the tour boats that cruise up to the cliff – the blocks just pop out on the surface and some are between 5m and 10m in size.”