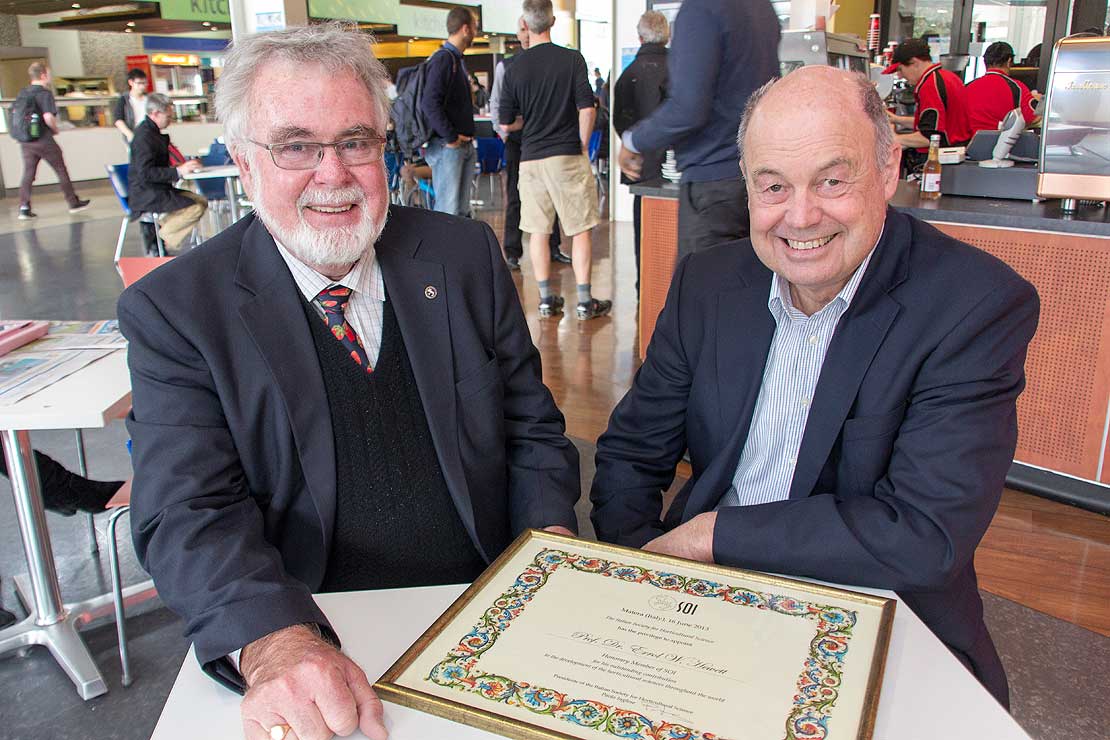 Three Massey University academics are now ranked in the top echelon of international horticultural science – an achievement hailed as extraordinary and unprecedented by the head of the Institute of Food, Nutrition and Human Health.

Professors Emeriti Errol Hewett and Ian Warrington are now Fellows of the International Society for Horticultural Science, a title shared by only 15 of the 7500-member society, which spans more than 50 countries.

Just last month the society elected Professor Julian Heyes as chairman of the Commission Fruits and Vegetables and Health: https://www.massey.ac.nz/massey/about-massey/news/article.cfm?mnarticle_uuid=047EE4E1-BD48-41BD-E2EE-10BA85BBB7E2

“Collectively, this is quite an extraordinary reflection of the excellence in horticultural and post-harvest science at Massey,” institute head Professor Richard Archer says. “As far as I am aware, no other organisation in the world has that amount of recognition.”

Professor Hewett’s work has introduced operating principles for overhead water sprinkling to protect fruit trees from damaging spring frosts on apricot and cherry orchards in Central Otago. In addition, he has demonstrated the productivity and economic benefits of using trickle irrigation for fruit trees in Nelson.

“Because of New Zealand’s distance from major markets, and the perishability of fresh, fruit, vegetables, and flowers, it is critical that we provide information to the horticultural industry that enables them to ship produce while maintaining top quality.”

He started at Massey University in 1986 as a professor of horticultural science and, since 2001, has been based in the Albany campus as an emeritus professor.

Professor Warrington has held a number of senior positions within the society over the past 25 years, including being a representative from New Zealand on the international council, vice-president for eight years, and currently the co-president of the congress, a major annual horticulture event where 4000 scientific papers are presented.

“New Zealand scientists have always been strongly involved with this international body that organises a scientific conference somewhere in the world every week of the year, attracting over 6500 members from 140 different countries,” says Warrington. “To have scientists from Massey University being recognised in this way is very special.”

Professor Warrington is known for his research into the environmental responses of plants and particularly for his work on the production of apples and kiwifruit.

Could robot harvesters be the way forward for New Zealand’s apple industry?
Massey teams up to lead nutrition challenge