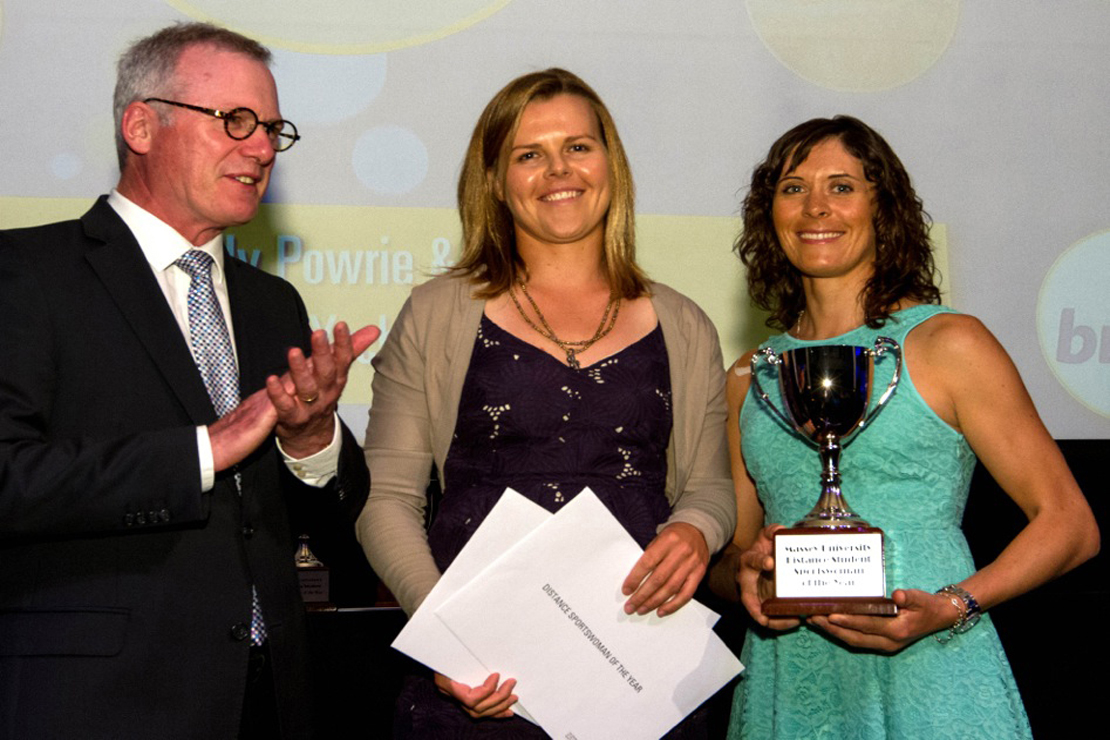 It’s the second year in a row that Ms Quilter, a Bachelor of Communications student, has won the award. She represents New Zealand in swimming and surf lifesaving, and at the Glasgow Commonwealth Games this year she was part of the 4 x 100m Freestyle Relay team that finished fourth in the final. In November 2013 she set a World Record in the 50 metre Manikin carry at the Germany Cup event. Ms Quilter was travelling in Asia and sent a message of thanks.

Mr Shaw is studying towards a Bachelor of Business Studies and plays as a defender in the New Zealand Black Sticks. He made his New Zealand debut in 2012, and was part of the team that finished fourth at the Glasgow Commonwealth Games. He was also a member of the 2014 Hockey World Cup team that finished seventh. So far he has 59 international caps for New Zealand. As he was playing hockey in Belgium, Mr Shaw’s award was collected by his parents, Neil and Alaine Shaw.

Guest speaker for the evening was Professor Gary Hermansson, team sports psychologist at the Glasgow 2014 Commonwealth Games, and professor in sport psychology. The master of ceremonies was Massey alumnus and 3News sports reporter Hamish McKay.

This year 112 Blues trophies and pins were presented to athletes across the university. Trophies are presented to first-time recipients, with a pin presented in subsequent years.

Earlier in the week at the Manawatū Blues Awards ceremony, New Zealand bowls player Mandy Boyd was named the BNZ Manawatū Campus Sportswoman of the Year. Ms Boyd secured a bronze medal in this year’s Glasgow Commonwealth Games in the Women’s Triples and was part of the team that won the National Open Championships in the Women’s Fours event. She recently completed her Bachelor of Fine Arts with Honours.

The BNZ Manawatū Campus Sportsman of the Year award went to softball star Callum Elson, who is in his first year of a Bachelor of Design (Honours) with a major in Industrial Design. The Auckland under-19 representative catcher played in the Junior Black Sox team that finished second in the under-19 World Series in Yukon, Canada, in July.

The list of all 2014 Blues recipients is as follows: