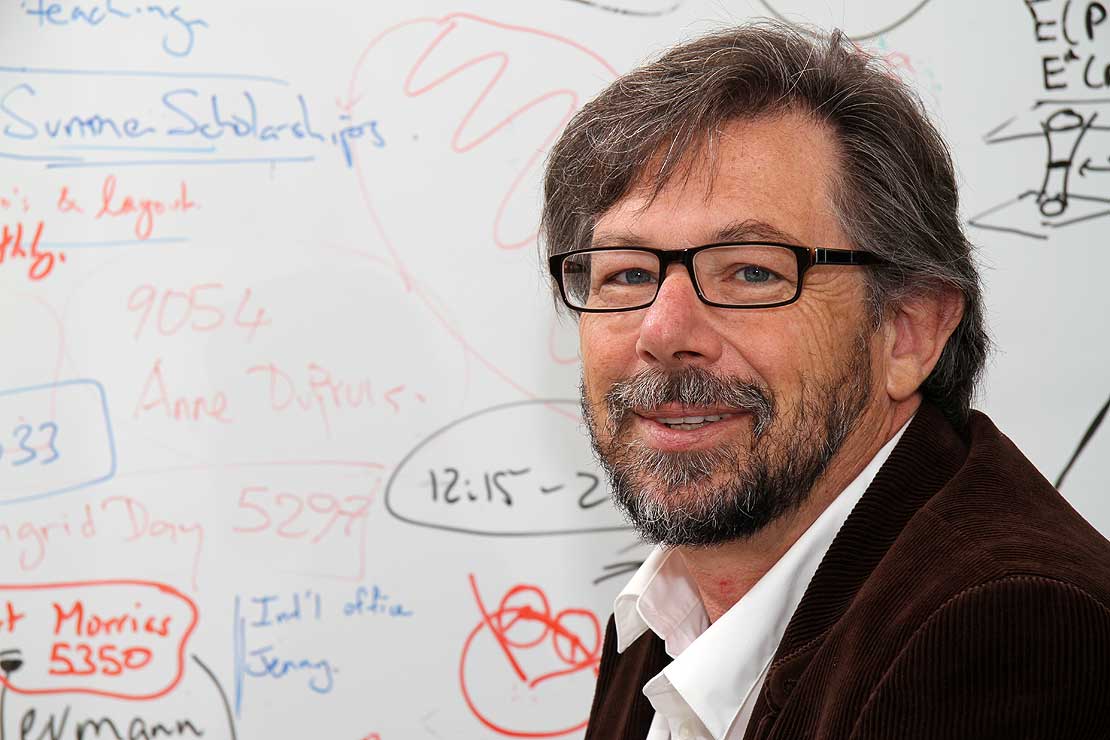 Internationally renowned mathematician, Distinguished Professor Gaven Martin, and his former PhD student Timothy Marshall, have received the Kalman Prize for their work solving a mathematics problem that was formulated long before either of them were even born.

The problem has been tackled by many leading mathematicians over the years, but solved for the first time by the pair. It was formulated by Carl Ludwig Siegel in 1942 and asks to determine the minimal co-volume lattices of hyperbolic 3-space. In other words, to seek best way to tile three-dimensional spaces using geometric pieces that are identical in form (a two-dimensional example is seen below).

The tiling-effect can be seen in two-dimensions in Maurits Escher’s famous wood cuts, such as Circle Limit III, better known as Angels and Demons, which are based around Siegel’s solution to the problem he posed for hyperbolic 2-space.

Professor Martin of the New Zealand Institute for Advanced Study, says the result has wide implications in geometry and even physics.

“As with much of mathematics, the precise application of this result – providing effective and sharp bounds on the number of symmetries of three-dimensional spaces in terms of their topology - is concealed within a specifically posed problem.” The paper ‘Minimal co-volume hyperbolic lattices, II: Simple torsion in a Kleinian group’ appeared in the Annals of Mathematics, widely recognized as the leading mathematics journal.  It is the second of two long papers which address the problem. Click here to read.

A strong advocate of the study of pure mathematics, Professor Martin has made an internationally recognised career out of developing tools and structures to find answers to puzzling questions that underpin our understanding of how the physical world works.

His research interests include non-linear analysis, elliptic partial differential equations and geometric function theory, particularly as it interacts with conformal geometry, quasiconformal mappings and their generalisations.

The Kalman Prize is worth $5000 for the best paper written by a New Zealand based researcher in the Mathematical Sciences in the last five years. It is funded by the Margaret and John Kalman Charitable Trust.

Universities: the future is here and it is online