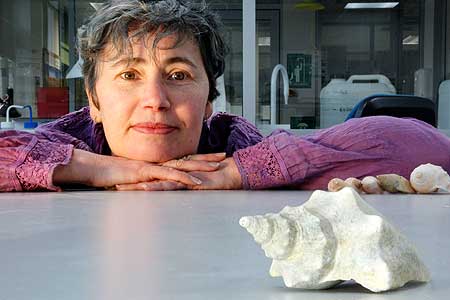 New Zealand marine snails could be the key to understanding just how evolution works, according to a Massey University research team.

Associate Professor Mary Morgan-Richards, of Massey University’s Institute of Natural Resources, is the principal investigator of a team that will study how and when species evolve.

The team that comprises Massey’s Associate Professor Steve Trewick, and Dr James Crampton and Dr Alan Beu of GNS Science, was awarded $690,000 by the Marsden Fund for the three-year project.

“While there was debate when the concept was introduced, now people generally accept that what we see in the fossil record – rapid morphological change, or change in appearance – is a result of new species formation, and punctuates long periods of no change,” she says.

The research will focus on New Zealand marine snail fossils over the last 10 million years and be sourced from GNS Science’s archives.

“The snails live on the ocean floor and it’s an ideal place to fossilise because the sediment quickly accumulates over the dead snails and layers build up. The uplift of land in the Whanganui Basin, where many fossils were collected, means we can date the layers accurately.”

The team will use morphological, stratigraphic and genetic analysis in their research. “We have large numbers of the snails so we can do extensive morphometric analysis, which will document the shape changes in the shells over time.

“Next generation DNA sequencing will be used to distinguish living species and study their evolution.”

Dr Morgan-Richards’ team will for the first time integrate genetics and palaeontology to study the same taxa and convincingly test between punctuated equilibrium and other evolutionary process.