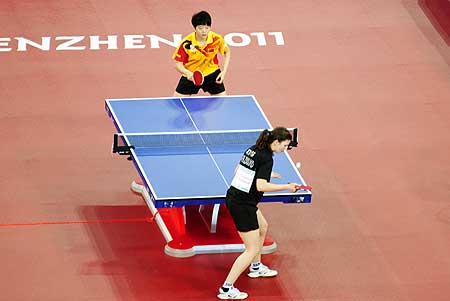 Natalie Paterson in action at the World University Games.

World Uni Games the 'trip of a lifetime' The trip of a lifetime was how student-athlete Natalie Paterson described her time at the World University Games in Shenzhen, China.

The games are held every four years and are the second largest global multisport event after the Olympics. For many sports, the games are of a comparable or higher standard than the Commonwealth Games.

Ms Paterson, who played table tennis, spoke about her experience at a function at Massey’s Manawatu campus today.

She said the size of the city and the event itself was immense, with the bus ride to the opening ceremony particularly exhilarating. “As soon as we were out of the village, there were swarms of people waiting, waiving and smiling on the streets just to get a glimpse of the athletes!”

Ms Paterson competed in the singles, doubles and mixed doubles at the tournament, and a large crowd watched her first match against a Chinese opponent on the main table.

She won her first round matches in both mixed doubles and women’s doubles in table tennis, and also won one of her pool matches in the singles.

Ms Paterson is a member of the Massey University Academy of Sport. The University’s Elite world Sports Travel Award helped fund her trip to the games.

In all, the New Zealand team won 12 medals. Nine Massey athletes won medals either individually or as part of a swimming relay team.

Assistant Vice-Chancellor Stuart Morriss congratulated Ms Paterson and the rest of the team for their efforts, “These outstanding results highlight how special each of you are, not only as athletes representing your country and university, but as students, balancing a full academic programme alongside your sporting careers.”

A function will be held at the Albany campus next week to honour the Auckland-based members of the team.