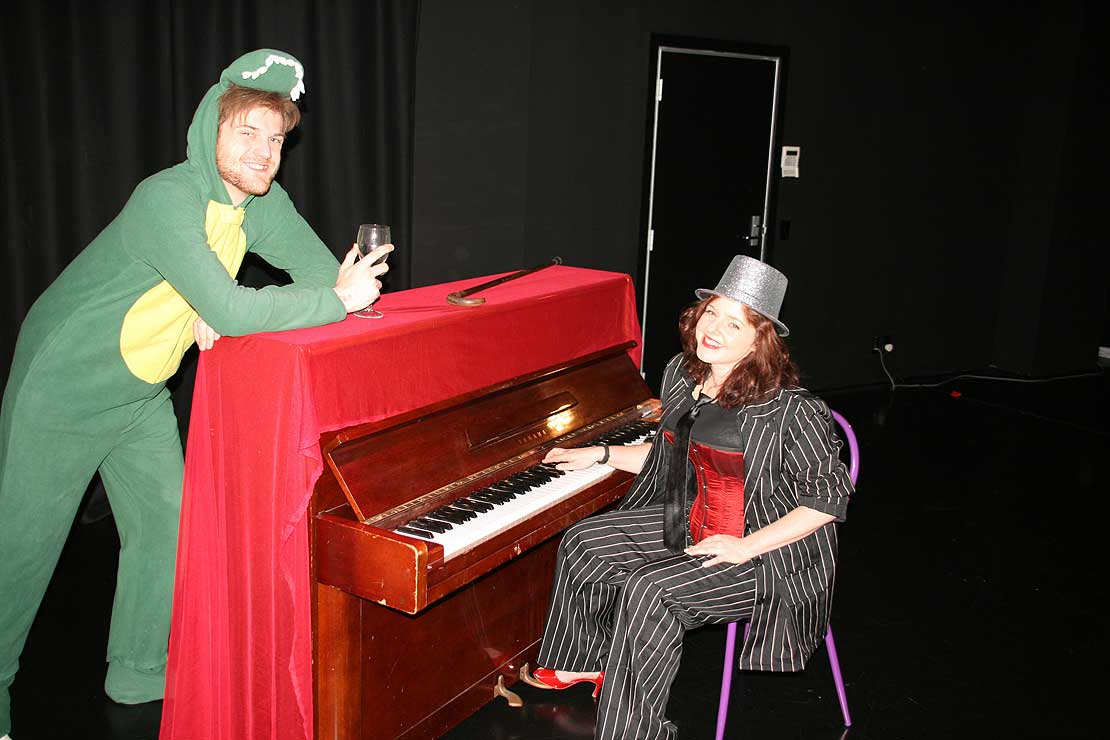 Hamish Boyle and Sara McBride, rehearsing for the world premiere of Mōrehu and Tītī

As world leaders prepare for the United Nations Conference on Climate Change in Paris next month, Massey University staff and students in Wellington are staging a series of provocative short plays and readings as part of a worldwide event harnessing theatre to encourage people to think creatively about the issue.

Titled Waves, the production includes the world premiere of a new short play, Mōrehu and Tītī, by award-winning Vancouver-based Māori playwright David Geary. The event is part of the Climate Change Theatre Action project – a series of worldwide readings and performances led from New York by Theatre Without Borders.

Associate Professor Elspeth Tilley, producer and director of the only New Zealand event in the global theatre action project, says the 1 November performances at Massey’s Theatre Lab will provide audiences with creative perspectives and solutions for what is often defined as the most pressing issue facing humanity.

Dr Tilley, a lecturer in the School of English and Media Studies, says the process of creating and performing theatre about a difficult and daunting topic can be empowering for participants and audiences.

“People get bombarded with information about climate change and the doom-filled scenarios – the result is that people become complacent and switch off,” she says. “The performances in Waves will entertain, console and confront you with works that are humorous and intense, problem-illuminating and solution-focussed, powerful, sometimes funny, sometimes catastrophic, often moving and inspirational.”

In David Geary’s play, ancient punk rocker tuatara Mōrehu is stuck on a drifting raft with Titī, a young sooty shearwater (muttonbird or titī) as they head towards Antarctica. Actors include PhD candidate Sara McBride, who plays a satirical version of climate change activist and former US Vice President Al Gore, and Bachelor of Communication student Hamish Boyle, an experienced stage actor who will take on the title role of Mōrehu.

Ms McBride, who is researching effective communication in disasters for her doctoral thesis, says theatre is highly relevant for equipping people to communicate in a crisis. “In a disaster you need people who can adapt and respond quickly to changing circumstances – learning about creativity and improvisation gives you this flexibility and mental agility, which is just what you need in dealing with emergencies.”

The programme includes a short play set in the Pacific and written by Dr Tilley, called Flotsam. It isabout a woman whose job is to assess climate change refugee applications. Her daughter, who is following the issue on Facebook, is less than impressed by her mother’s decisions.

Dr Tilley says there are currently 100 Climate Change Theatre Action events scheduled in 22 countries, ranging from living-room readings to fully produced shows, and from site-specific performances at the foot of glaciers to radio programmes and film adaptations.

“Of all these, ours – Waves – will be the first,” she says. “We see the sun first in New Zealand and so we will also be leading the world in launching the first Climate Change Theatre Action event.”

Climate Change Theatre Action is a partnership between three international creative activism non-governmental organisations; Theatre Without Borders, The Arctic Cycle and No Passport.  It is a registered part of Artcop21, the official worldwide cultural programme of the United Nations Climate Change Conference in Paris later in November.

The Waves event will conclude with announcing the winners of the Expressive Arts Club Climate Change Creative Writing Competition.

For more information check the Facebook page for the performance here. Tickets are free but limited – to reserve seats click here.

Create1World – an antidote to climate grief
Horse comedy a treble win for Massey playwright
Opinion: Why I support the school strike for climate
Climate summit highlights ways to engage the public