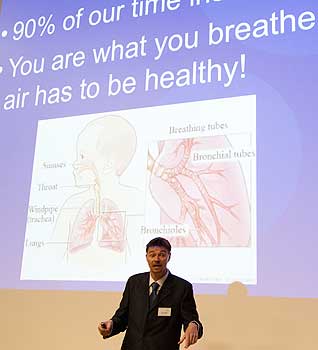 Dr Mikael Boulic presenting his research at the awards. 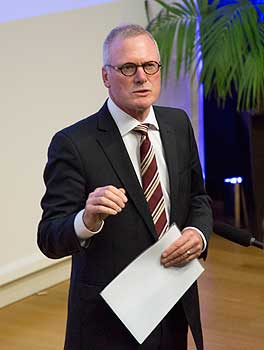 The award is in recognition of a project to improve health outcomes and indoor environments in primary schools, in an effort to decrease rates of illness, decrease absenteeism and the level of chemical pollutants using a low-cost solar ventilation unit.

Health Research Council (HRC) Chief Executive Professor Kath McPherson presented Dr Boulic with the award at Massey’s Wellington campus last night. This is the third in a series of events organised by New Zealand’s leading institutions that the HRC is partnering with this year to celebrate health research and help mark the council’s 25-year anniversary.

Dr Boulic said he was humbled by the recognition. “I have been fortunate to be supported by HRC while I have been developing my research career. I’m very pleased my research on improving the healthiness of homes and schools for children was recognised by my peers.

“This is a great achievement, and I’m thankful for my colleagues from Massey, the University of Otago’s He Kainga Oranga - the Housing and Health Research Programme, BRANZ, GNS Science, MidCentral DHB, Ministry of Education and representatives from the industry for their great mentoring and support. They also deserve a share of this award.”

In his presentation at the awards ceremony, Dr Boulic said that, on average, homes in New Zealand are too damp and too cold, impacting on excess winter mortality, asthma and other respiratory issues. He said these conditions favor mould and bacteria growth, which could adversely impact on hospital admission for skin and respiratory infections.

Dr Boulic and his colleagues found the main part of airborne dust monitored and inhaled by children in classrooms, was tracked inside by children’s footwear and released when the children are moving around. “The particulate matter levels found in the classrooms were very close to the World Health Organisation maximum recommended level,” he said.

In future research, Dr Boulic plans to investigate some solutions, such as having children remove their shoes before entering the classroom, testing different cleaning regimes and testing different types of flooring to decrease the level of dust.

Dr Boulic also spoke about improving the health of the classroom environment using solar ventilation units. “Solar energy was used to preheat outdoor fresh air that was supplied into the classrooms. This simple solution had a positive impact on the classroom environment, by increasing the ventilation rate and temperature and decreasing the levels of chemical pollutants. Furthermore, some teachers took the advantage of having a solar ventilation unit installed to discuss with children sustainable energy and create education activities around solar energy.”

“Dr Boulic’s work offers an outstanding example of Massey University’s strong contributions to public and applied health research in New Zealand. We are justifiably proud of Dr Boulic’s research and congratulate him on this achievement.”

“The results from his research group work were used to develop the EECA’s successful Warm Up NZ: Heat Smart Programme, which has provided thousands of New Zealanders with a warmer, pollutant-free environment.”

Dr Boulic is coordinating the first New Zealand symposium on Healthy School Research which will be held on September 5, at Massey University’s Auckland Campus.