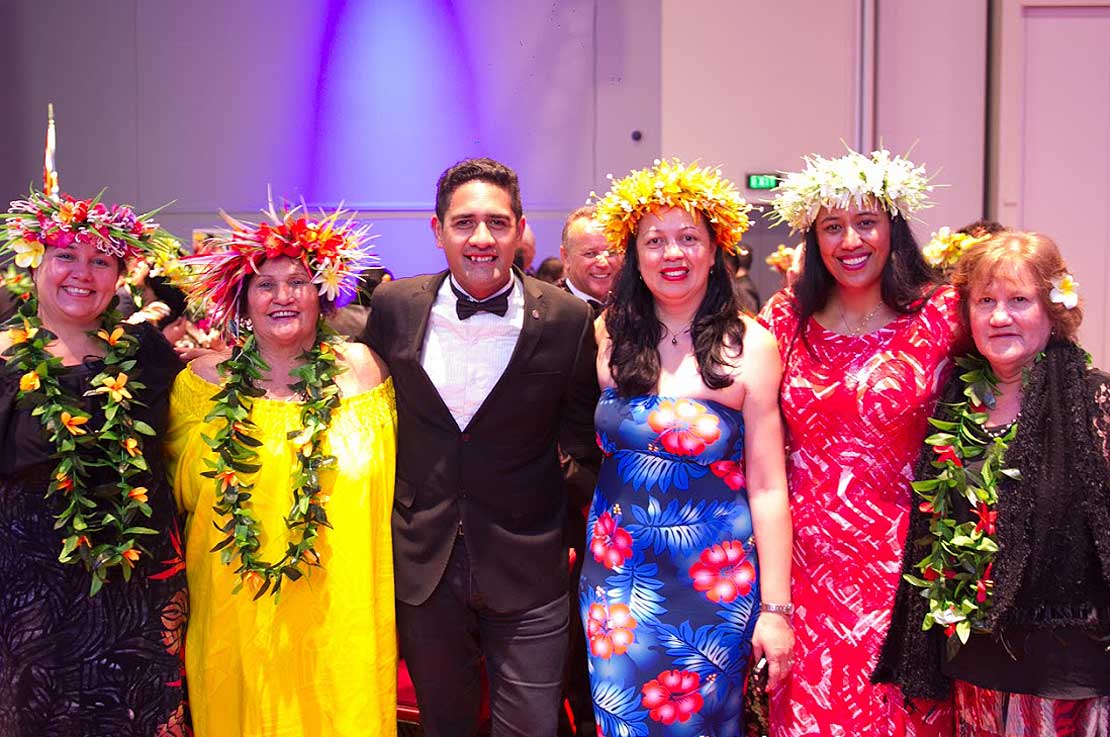 Dr Hunter, who has pioneered an innovative, culturally tailored teaching model to address mathematics underachievement among Pasifika and Māori pupils, was one of 19 Cook Islanders to receive an Acknowledgement of Excellence at the Kia Rapa Tu Taku ‘Oe event in Wellington.

She and two others, Dr Marjorie Crocombe and Dr Jon Jonassen, were recognised by the Hon Henry Puna, Prime Minister of the Cook Islands, for their achievements in education leadership at the event, hosted by the Cook Islands’ High Commission.

Dr Hunter, who is from Manihiki Island in the Cooks’ Northern group and Aitutaki Island further south, says she is delighted to be recognised by her own country. Her 89-year-old mother, Eileen Cavanagh, who she credits with inspiring an early interest in mathematics through making geometric fabric patterns for the traditional tivaevae quilts, was at the event. Dr Hunter says the highlight of the night was when her mother did a spontaneous hula on stage to the beat of traditional drums as she received her award.

Recipients were chosen on the basis of their international or national achievements, and recognised as past, current or emerging leaders/experts in their field.

In Dr Hunter’s ‘communities of mathematical inquiry’ approach – dubbed ‘Bobbie maths’ – primary pupils work together to unravel a problem. And instead of defaulting to Western examples when applying mathematical concepts, they might refer to the weight of a taro, or dimensions of a tapa cloth. The approach is a major factor in breaking down barriers that inhibit many from engaging and achieving in mathematics.

Last year, the Ministry of Education allocated $1.5m to enable her to continue refining the model, evaluate its success and to provide professional development to 140 more teachers in 16 South Auckland schools, as well as in Porirua. Her aim is to see teachers in low decile schools across the country using the model, which she developed for her PhD five years ago.

Dr Hunter, who is based at the Institute of Education at the Auckland campus, is in demand to share her teachings at home and worldwide, from Singapore and Hawa’ii to Canada and the United Kingdom. Education ministries in the Cook Islands and Samoa – where pupils also struggle with a mathematics curriculum based on the New Zealand numeracy programme – are showing interest, she says.

Cook Islanders successful globally in a range of fields including the creative arts, enterprise, education, health and wellbeing, and leadership were also recognised at Kia Rapa Tu Taku ‘Oe, which translates as “Let my paddle help my waka move forward in positive ways.”

The High Commission plans to host the event every two years, and to collate the profiles of those recognised in a special publication.

Cook Islands’ Deputy High Commissioner Tepaeru Herrmann says; “2015 being the 50th year of the Cook Islands relationship of free association with New Zealand provides a platform upon which to not only celebrate 50 years, but chart a course of development for Cook Islanders globally for the next 50 years.”

“The role of professionals and experts like Dr Hunter will be instrumental in supporting the development of the Cook Islands and Cook Islanders globally.”

Around 65,000 of the total 100,000 Cook Island population lives in New Zealand, leaving 16,000 in the Cook Islands and the remainder in Australia and other countries.