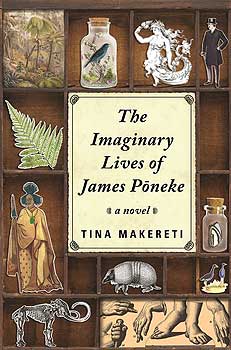 An OE starting in London is a milestone for many young Kiwis. Award-winning author and creative writing lecturer Dr Tina Makereti’s new novel explores the intriguing and remarkable ‘overseas experiences’ of a young Māori man shipped to London in the 1840s as a living human exhibit.

In The Imaginary Lives of James Pōneke (Penguin Random House NZ) Dr Makereti, based in the School of English and Media Studies, evokes the grim, gritty feel of Victorian London’s cobbled streets, brick buildings, sewers and smoke stacks from an Indigenous Aotearoa perspective. Her innovative historical novel offers a fresh and highly personalised look at the impact of colonisation by reversing the setting and lens. Instead of colonising Europeans reacting to what they find in the South Pacific, the reader inhabits the marvels and grubbiness, the alien mannerisms, prejudices and preconceptions of the ‘old world’ through the eyes of the colonised.

The main character, James Pōneke, the orphaned son of a chief, was partially inspired by Hemi Pomare, whose true documented story of a similar experience provided the “scaffolding” for her own character, Dr Makereti says.

Eloquent and well-versed in the English language, having been raised and educated in a mission school, Pōneke conveys his encounters and impressions of London’s melting pot. Engaging with a diverse array of characters – from the genteel to the brutish, artists and rogues – he also notes the discomfort of onlookers when he is no longer a cultural spectacle but speaks in cultured English to those who see him as ‘other’.

Although a museum exhibit to be gawked at a time when living human exhibits and circus freak shows were a popular phenomenon, Pōneke’s inner life and imagination are stirred by what and who he gazes at, accentuating what it feels like to be paraded as a ‘specimen’ for others to observe, Dr Makereti says.

The author, who co-edited a collection of Oceanic stories published last year and titled Black Marks on the White Page (Penguin Random House NZ), with acclaimed writer Witi Ihimaera, had never been to London before she started writing this, her second novel. Like James Pōneke, she too had the experience of discovering London for the first time and was equally enchanted with it, albeit in a very different context.

What struck her was a strong sense of the past in the Victorian-era architecture, paving and parks. Her in-depth researchspanned Charles Dickens’ novels to archives on the planning history of London at the time James Pōneke visited, and the history of living human exhibits who featured in 19th century museum and art gallery exhibitions of Europe to showcase the latest industrial and scientific discoveries.

In November Dr Makereti will return to London for the Oceania exhibition at the Royal Academy of Arts where she will be part of a panel of writers to discuss the Indigenous writing of Oceania. The exhibition marks 250 years since Captain James Cook’s first voyage to the Pacific and runs from September 29 to December 10.

She has also been invited to take part in a panel discussion at the International Festival of Writers in Toronto next month, joining writers Michael Berry, Dulce Maria Cardoso and Wu He to discuss themes of colonial history, genocide and reconciliation.

Dr Makereti's first novel, Where the Rēkohu Bone Sings(Penguin Random House NZ, 2014) won the 2014 Ngā Kupu Ora Māori Book Awards Fiction Prize, which she also won in 2011 with her short story collection, Once Upon a Time in Aotearoa (Huia, 2010). She won the Commonwealth Short Story Award for the Pacific region in 2016 and has been the recipient of the Royal Society of New Zealand Manhire Prize for Creative Science Writing (non-fiction) and the Writer in Residence at the Weltkulturen Museum in Frankfurt. Dr Makereti is of Ngāti Tūwharetoa, Te Ātiawa, Ngāti Rangatahi, Pākehā and Moriori descent.

Listen to a review of her new book on Radio NZ’s Nine to Noon, and an interview with Dr Makereti and Lynne Freeman on Radio NZ’s Standing Room Only.