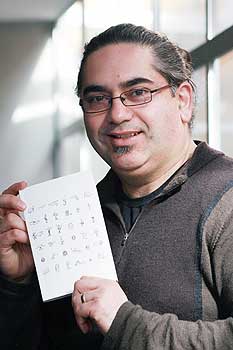 Dr Darryn Joseph with a copy of his
award-winning book Hewa.

The announcement that his book had won the Kura Pounamu Mäori language category of the Library and Information Association of New Zealand’s Children’s Book Awards comes just as Dr Joseph nears completion of his next writing project.

Dr Joseph, a Mäori language lecturer based at Te Pütahi-a-Toi (the School of Mäori Studies) at the University’s Manawatu campus, says the book, Hewa (Fantasy), has similar themes to his new project: identity, reality and fantasy, life on the margins.

“Hewa is about a boy who wants to help protect his family and friends from a baddie," he says. "It involves American military software, a futuristic battleship called the USS Barack Obama, and artificial intelligences gaining sentience and self determination.

“It’s fantastic being honoured at a national level. It makes me want to write more children’s fiction."

Dr Joseph (Ngäti Maniapoto) has written six books in Mäori. He says Hewa fulfilled a long-held dream to both illustrate and write a book for Mäori speaking children. His writing passion began after winning a Huia Short Stories Award in 2003 for Tama Tähae, Tama Ora, a story about a family of thieves that had to prove to their father that they were the best thieves and receive the family heirloom. “The idea for that story came from a style of writing found in eastern fairy tales.”

His current project, a 30,000 word novel, backed by a Creative New Zealand grant that allowed him to be released from teaching in the first semester, has enabled him to explore and make accessible some of the findings of his PhD research and doctoral thesis – also written in te reo Mäori. “It’s kind of stepping out of the mould of what usually happens to PhD research – it’s a creative way of getting the research I have done out there.”

For his doctoral thesis Dr Joseph researched Mäori language features that would provide a strong foundation for appreciating Mäori literature. He created a Mäori text-type taxonomy and then defined 10 figures of speech, such as metaphor, simile and idiom, using examples and explanations from interviews.

“I have based the new book on what people that I interviewed thought makes good literature in Mäori including figures of speech like metaphor, simile and personification.”

The working title of his new book is Te Haerenga Miharo a Arekahänera (translated as Alex’s Fantabulous Journey). One of the chapters is located in ‘te whenua o te kiï’ or the “land-of-speak”.