Watch a video of the hagfish in action. 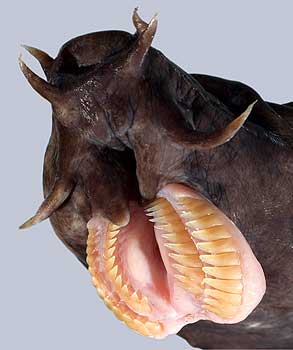 A hagfish showing its teeth. 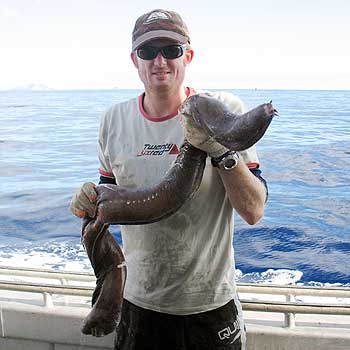 The hagfish found in New Zealand’s deepest waters is grotesque enough, thanks to its scary protruding teeth straight from a horror film.  Now, scientists have witnessed the full power of its other gruesome feature – a built-in slime weapon to deter predators such as sharks, making it one of the planet’s ultimate survivors.

Researchers from Massey University and Te Papa have just released graphic underwater footage showing for the first time how the primitive hagfish – also known as the snot-eel – defends itself by emitting a choking, gill-clogging slime that might be the envy of any surfer under attack from a shark.

The footage, part of a study of New Zealand’s deep-sea animal diversity, is from special cameras that captured images of various fish attacking hagfish off Three Kings and Great Barrier islands as they feed on bait attached to the camera.  As soon as it is attacked, the hagfish releases a gooey mucus-like substance from its battery of slime glands and up to 200 slime pores, causing predators to gag before hastily retreating.

“Our video footage in New Zealand waters has proven that hagfish secrete slime at an incredibly fast speed when under attack by predators such as large sharks or bony fishes,” says Te Papa’s Dr Vincent Zintzen, lead scientist of the project.

A paper on the findings just published online in Scientific Reports (Nature Publishing Group) titled Hagfish predatory behaviour and slime defence mechanism describes the effectiveness of the “copious slime” in choking would-be predators without apparently poisoning or killing them. This in turn allows the hagfish to carry on feeding or to make an escape, clearly a success as an evolutionary strategy.

Other new findings include the discovery that the hagfish is not only an ocean scavenger but is also a predator – with a twist. Footage reveals its bizarre method of burrowing into sand in pursuit of a red bandfish by knotting its tail for additional leverage as it grabs its hidden prey before unknotting and emerging from the sand.

“Taken together, the findings help to explain why the hagfish, a very primitive fish, has endured successfully for around 300 million years,” she says. Anatomically modern humans have been around for just 200,000 years by comparison.

“We know so very little about the deep sea. Simply dropping cameras into the water at a range of depths in a systematic design not only gives us good quantitative data to model diversity and behaviour, it also has a high probability of finding something new,” Professor Anderson says. “Using underwater video cameras, we can actually see fish in their own environment, which is far more informative than what can be learned from the often bedraggled specimens brought to the surface in research trawls.”

Dr Clive Roberts, co-author and curator of fishes at Te Papa, says the ecological role of the hagfish may be far more diverse than previously considered. “Hagfish, which are quite abundant in the deep sea, were previously observed feeding on carcasses of dead whales, fishes and invertebrates. Our video footage now clearly shows that hagfish are also hunters able to prey on live fishes.”

Since 2009, the scientists have deployed cameras at depths ranging from 50 to 1500 metres around New Zealand. So far, more than 1000 hours of footage has been collected off the Kermadec Islands, Three Kings Islands, Great Barrier Island, White Island and Kaikoura, with surveys to extend in 2012 to the sea off the Otago Peninsula and down as far as the Auckland Islands.

This research was funded by a Royal Society of New Zealand Marsden Fund Grant to Dr Roberts and Professor Anderson, a Te Papa Collection Development Grant as well as support by the Ministry of Science and Innovation via NIWA and the University of Western Australia.

The open-access article, which includes underwater videos, available through the following link: http://www.nature.com/srep/index.html