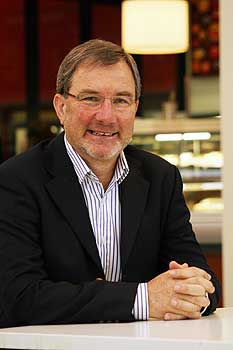 Increasing New Zealand’s population to 10 million people, under a comprehensive 50 year Population Policy to build the economy, is just one of the ideas being discussed in an immigration conference at Massey University’s Albany campus from October 24–26.

The conference, entitled Pathways to Metropolis in the 21st Century: Immigration Issues and Futures aims to communicate research results from publicly funded programmes. More than 300 delegates are expected to attend from New Zealand and around the world to discuss topics ranging from megatrends and scenarios in the Asia/Pacific region, future workforces and the skills required for the 21st century, and pathways for development in Auckland.

“New Zealand has gone from having a very ‘white’ immigration policy in the 60s to being super-diverse in 2012. This is a significant shift and has occurred with minimal conflict,” he says. “Immigration has been really important – in part to replace people emigrating and to dampen the effects of population aging. We rely on immigrants for their skills and entrepreneurialism.”

Professor Spoonley is delighted that some of the world’s global specialists in migration from Oxford University, the National University of Singapore and the OECD are coming to Albany to share their research.

A book co-authored by Professor Spoonley and Professor Richard Bedford from the University of Waikato will be launched at the conference. Welcome to Our World? Immigration and the Reshaping of New Zealand investigates the changes in New Zealand’s demography and its flow-on effects to the nature of community life and cityscapes.

Cultural events at the conference include a lunchtime performance by the NZ Trio, an erhu (two-stringed instrument or ‘Chinese violin’) performance by Vera Chian, an art installation by Aurelia Zatta and a Chiwi Identity photo exhibition to showcase the crossover between Chinese and Kiwi culture, by Photowhisper Incorporated.

This is the first time the conference has been held in Auckland.

For more information on the sessions go to: http://newsettlers.massey.ac.nz/events.php

A Population Policy for New Zealand: What would it look like? Paul Spoonley presenting 24/10
With the exodus of young NZ’ers overseas, a declining birth rate and increased longevity, New Zealand’s population is ageing prematurely. One suggestion to help build the economy is to double or even triple the population in the next 50 years. How would this impact social cohesion, ethnic relations and regional disparities – and will it deliver economic gain?

Migrant Entrepreneurship: An overview of the barriers, catalysts and the potential for economic growth. Paul Spoonley presenting 25/10
Are immigrants presented with barriers to employment that ‘push’ them into setting up their own business – often within their own ethnic enclave?

New Zealanders’ Attitudes to Asian Immigrants and Immigration – 1997 to 2011.
Paul Spoonley organising and presenting 25/10
New Zealand’s population diversity has changed immensely over the last 50 years, to the point where our superdiversity, as a proportion of NZ’s total population, is ahead of Canada and only just behind Australia. Survey results of New Zealanders’ perceptions of Asia and Asian peoples, and attitudes to immigrants and immigration will be presented and trends discussed.

Migrants’ Experiences of being ‘At Home’.
Trudie Cain organising and presenting 26/10
Although people often move to new countries in search of work, it’s not just about the job. How do new migrants transform New Zealand into ‘home’ for them and their family? How do members of the host society recognise and support these new New Zealanders?