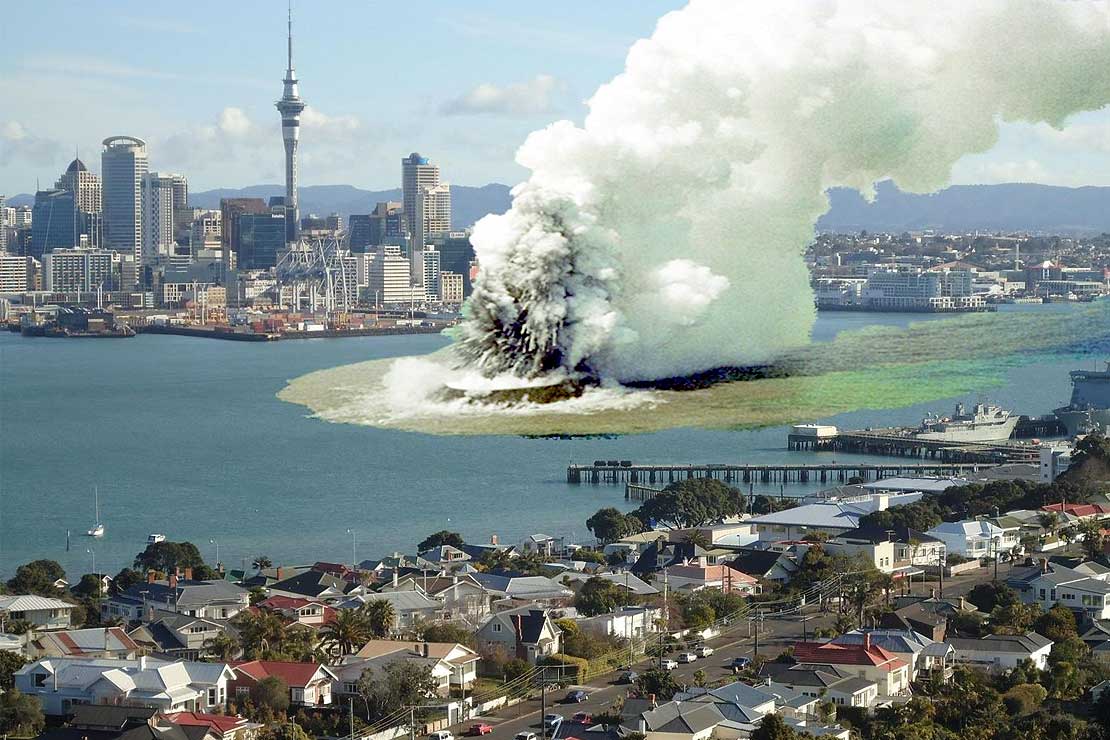 An artist's impression of a magma-water explosive eruption in Auckland The susceptibility map of Auckland. Red and orange shows areas
that have a higher risk of explosive volcanic activity.

A new, geology-based approach has predicted just how susceptible various areas of Auckland are for initial explosive volcanic activity – with Three Kings and Māngere identified as potentially high-risk areas.

The research uses Geographic Information Systems (GIS), a technique that combines multiple levels of information onto a map, to give a susceptibility score from one to 10, with one being the most susceptible to a particular type of eruption.

Gábor Kereszturi, a PhD student from Massey University’s Institute of Agriculture and Environment, applied the GIS-based mapping technique to volcanology to understand potential volcanic hazards of the broader Auckland region. He used it to study the Auckland Volcanic Field, a 360 square kilometre area stretching from the North Shore to the Manukau lowlands.

Mr Kereszturi studied a particular type of eruption known as phreatomagmatic, where magma and water, from underground water table mix to cause a violent explosion.

The first layer of information he collected was a detailed map of the topography of the field created from a laser scanner mounted on a low-flying helicopter. The second layer combined topographic data with geological maps and field mapping, enabling him to estimate how past volcanoes erupted and which areas they affected.

He used the two layers of information to establish a new catalogue of 52 volcanoes that had previously erupted in the field. By then applying a sophisticated physics-based model called MAGFLOW to three well-studied volcanoes with lava flows, he was able to predict how lava might flow based on past eruptions, current landscape and lava cooling.

Mr Kereszturi says previous models have taken topography of Auckland into account but his is the first to combine topography with lava cooling estimated from past eruption properties.

The final layer of information was to include environmental factors like thickness of underlying rocks and sediments in Auckland, sea water level and distance from fault lines.

His scoring system shows areas of red – Three Kings and Māngere – that have a higher chance of explosive volcanic activity than other areas like the elevated areas of North Shore. Other areas of moderate risk include Favona and Otahuhu whereas the safest areas are Glenfield and Chatswood.

He says a GIS approach is extremely powerful because for each layer of data you add, the clearer the risk and volcanic hazard picture becomes. “Forecasting where the next eruption is going to occur is challenging. But by creating a model based on many different types of information we have readily available, it allows us to predict how a potential future volcano in Auckland might erupt and how big an area it would impact.”

The next step is to gather information about the urban objects like buildings and infrastructure and add these to the model. “The more information we keep collecting, the better these models will become and the better they can inform hazard prevention or control strategies.”

The research was funded by the Ministry of Business, Innovation and Employment as part of the New Zealand Natural Hazards Platform, which is a research collaboration between the Auckland Council, the Earthquake Commission, Massey University’s Volcanic Risk Solutions Centre and the University of Auckland. MAGFLOW was originally developed by Dr Ciro Del Negro and his research team in Catania at the National Institute of Volcanology and Geophysics (Istituto Nazionale di Geofisica e Vulcanologia).

Mr Kereszturi is now working as a research officer in the New Zealand Centre for Precision Agriculture at Massey. He graduates with a PhD in Earth Science next week in Manawatū.