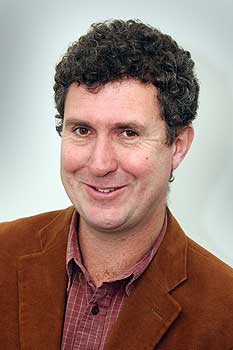 Two Albany scientists have been named distinguished professors for their outstanding work and international eminence in the fields of evolutionary genetics and theoretical physics.

Paul Rainey, professor of evolutionary genetics at the New Zealand Institute for Advanced Study and the Institute of Natural Sciences, and theoretical physicist Professor Peter Schwerdtfeger, director of the Centre for Theoretical Chemistry and Physics at the same institute, have been awarded the highest recognition the University bestows on professorial staff.

Professor Rainey says the title is a “great honour” and he appreciates the recognition for his work spanning a wide range of projects, including current work on PSA (Pseudomonas syringae pv. actinidae) – a bacterial pathogen causing the widespread destruction of kiwifruit vines in New Zealand and Italy.

He is part of an international team of scientists working with Zespri and Plant and Food Research to sequence PSA genomes in a bid to identify and understand the diversity and differences between various strains of the virus and its impact on plant resistance.

His distinguished research background culminated last year in being appointed a member of Germany’s most prestigious academic institution, the Max Planck Society. He is a fellow of the Royal Society of New Zealand and a James Cook Research Fellow. He is also principal investigator at the Allan Wilson Centre for Ecology and Evolution, and visiting professor at Stanford University in the United States, where he is co-director of the Hopkins Microbial Diversity programme.

His appointment as external scientific member – and honorary director – of the Max Planck Institute for Evolutionary Biology in Plön, Germany is testament to the high regard in which he is held internationally, according to College of Sciences Pro Vice-Chancellor Professor Robert Anderson.

Professor Rainey completed his PhD at Canterbury University and in 1989 went to Cambridge where he worked as a post-doctoral fellow. In 1991 he moved to a government-funded research institute in Oxford. In 1994 he was awarded an advanced research fellowship, which he took to Oxford’s Department of Plant Sciences. In 1996 he was appointed to a faculty position at Oxford, a fellowship at St Cross College, and a stipendiary lectureship at Wadham. He returned to New Zealand in 2003 as chair of ecology and evolution at Auckland University, retaining a fractional professorial position at Oxford. He joined Massey in 2007.

Professor Schwerdtfeger says he is “deeply honoured, but really I do not feel distinguished at all. There are so many good scientists out there, and I’ve worked with so many gifted PhD students and postdoctoral fellows.”

He is currently working on graph theoretical aspects of fullerene structures, including a programme code he developed (freely available at the Massey web-site), the origin of biomolecular homochirality and its implications for the origin of life, gas separation with graphene membranes (methane separation to avoid future disasters like the Pike mine), relativistic effects in heavy and superheavy elements, high-pressure physics, and many more – just what is fun to work on.

A career studded with research accolades and awards includes winning last year’s Fukui Medal for outstanding theoretical/computational chemists in the Asia-Pacific region for his achievement in quantum chemistry, in particular for his deeper understanding of quantum relativistic effects.

In November 2010 Professor Schwerdfeger, whose research has helped explain the physics and chemistry behind the colour of gold, was awarded another prestigious international science prize, the Humboldt Research Award.

The German-born scientist gained a degree as a chemicotechnical assistant at the Chemisches Institut in Stuttgart, Germany, in 1973, a chemical engineering degree from Aalen in 1976, and a PhD in 1986 from the University of Stuttgart. He has held a numerous positions as teaching and research fellow at universities in Germany, Australia and New Zealand. He joined Massey in 2004.

His Marsden-funded projects include experimental and theoretical investigations of the nanostructures of gold for a better understanding of the quantum size effects in nanostructured materials, and understanding and modelling the behaviour of dynamic clusters of atoms and molecules in heavy metal clusters. He collaborates intensively with more than 30 research groups worldwide on topics ranging from computational inorganic and organic chemistry to materials science and high-resolution spectroscopy. He has been the recipient of six Marsden grants totalling $4 million.

The two appointments bring the total number of distinguished professors at the University to six, including Albany-based theoretical mathematician Gaven Martin, director of the New Zealand Institute for Advanced Study. Scientists Paul Moughan and David Penny, and the College of Education’s Bill Tunmer, are based at the Manawatu campus.

The Human Resources office says the award of distinguished professor is the highest recognition the University can bestow on professorial staff who have achieved positions of eminence internationally in their field. No more than 10 can hold the title at any time.