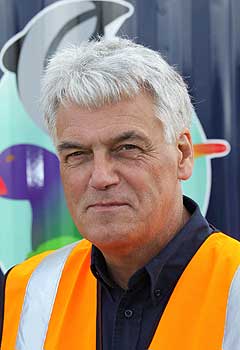 The Massey University-led wildlife response to the Rena oil spill has been praised as one of the quickest in the world, thanks to excellent foresight and planning systems.

There are 385 animals in the wildlife centre set up in Tauranga, with three more little blue penguins arriving yesterday. Long-term penguin enclosures are being built to house the birds until it is safe to release them into the wild.

Seven international experts are working at the wildlife centre. Alternate Wildlife Centre manager Curt Clumpner, who has worked on numerous oil spills since the Exxon Valdez Alaska disaster, says New Zealand’s response is one of the quickest he has seen.

“The speed of response in New Zealand is among the top two or three countries in the world,” says Mr Clumpner, an American from International Bird Rescue. “The wildlife response centre was set up and ready to clean birds within a day of the grounding. That’s incredibly quick compared to other spills I’ve been involved in.

“The team at Massey University have been planning for this for years and they have been constantly updating their training. It’s especially impressive given that New Zealand hasn’t had a major oil spill before.”

Massey is under contract to Maritime New Zealand to provide an oiled wildlife response capability. The specialists from Massey lead the National Oiled Wildlife Response Team, a network of veterinarians and specialists from throughout the country. The team is leading the Rena response.

Mike Ziccardi, director of the Oiled Wildlife Care Network at University of California Davis, says the focus is on getting the job done with none of the political wrangling that has marred some clean up efforts in the USA.

“As soon as the Rena grounded Kerri Morgan from the National Oiled Wildlife Response Centre emailed her international networks to check everyone’s availability,” Dr Ziccardi says. “That’s the first time I’ve seen that happen – a testament to the sense of cooperation here. The response really has been fantastic.

“They have a calm and positive attitude and that’s excellent as it’s really easy for people to panic and get emotional in these situations.”