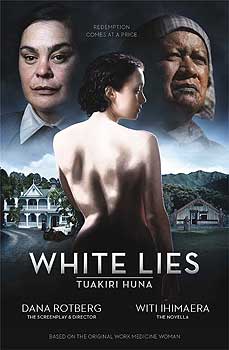 The book version of the movie White Lies: Tuakiri Huna that was submitted as New Zealand’s best foreign language entry for the 86th Academy Awards has been chosen as a winner in the fifth annual Māori book awards.

Winning authors, publishers and distinguished guests will join University staff and students at an awards ceremony to be held at Te Wharewaka o Poneke function centre in Wellington on November 7.

The books were selected from those published between August 2012 and July this year. Five categories were identified, biography, fiction, non-fiction, te reo Māori and a special award. White Lies won the fiction category.

Chair of the three-member panel of judges and Massey senior lecturer Dr Spencer Lilley says the awards are held to address the dearth of Māori literature for adults. “The awards were created as a result of other major book awards consistently failing to acknowledge Māori authors. The awards also foster Māori literary excellence, authorship and scholarship in te reo Māori.” The awards are named Ngā Kupu Ora, which translates as “the living words”.

Ka Mau te Wehi: Taking Kapa Haka to the World is described by the judges as an inspirational story, a love story like no other with a kapa haka twist. It is about the life of Ngapō (Bub) and Pimia (Nen) Wehi who formed the kapa haka groups Te Waka Huia, Te Manu Huia, Pounamu Huia and Te Rōpū Āwhina, as well as being part of the well-known Waihirere kapa haka group. The story is written in collaboration with the Wehi whānau and told through the eyes of Bub Wehi.

White Lies: Tuakiri Huna, which loosely translates as hidden identity, is based on an original story by Witi Ihimaera called Medicine Woman published in Ask the Posts of the House in 2007. It is not the first story by Mr Ihimaera to be rewritten. The judging panel said his willingness to re-engage and re-invent his stories makes him an inspirational author.

Henare Tate (2012), He Puna Iti i te Ao Mārama: A Little Spring in the World of Light. Published in Auckland by Libro International.

He Puna Iti i te Ao Mārama: A Little Spring in the World of Light is a compelling and passionate description of the role that Māori tikanga (protocols) and kaupapa (methodologies) play in the construction of a Māori Christian theological framework. Tapu, mana, pono, tika, and aroha are among the many concepts contextualised in the book.

He Papakupu Reo Ture: A Dictionary of Māori Legal Terms signals change in the growth of te reo Māori both as an academic subject and in the legal domain. The bilingual dictionary is designed for Māori speakers who want to use Māori terms to write and speak in Māori about a legal topic. The book uses Māori sources from the last 181 years. There are 2114 entries and its contribution to professional Māori language usage is to be applauded.

Maumahara: The Memories of Te Onehou Phillis is an autobiography she wrote for her whānau so they would understand her upbringing. It takes the reader back in time to rural Māoridom in the early 20th Century. She was born on June 19, 1926, to Te Pareake a renowned weaver, and Eruera Riini Mānuera – chief and recognised leader of Mataatua. In the book she talks about her family, childhood, education, marriage and her return home to work for her people of Ngāti Awa. Maumahara is an invaluable representation of Māori social history.