Home > About Massey > News > Penguins wait out moult at Massey 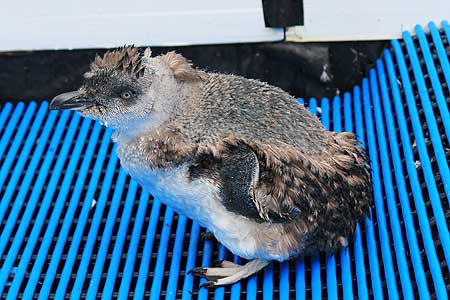 A moulting little blue penguin at the wildlife facility at Massey’s Manawatu campus.

Penguins wait out moult at Massey

The University-led National Oiled Wildlife Response Team has decommissioned its facility at Te Maunga in Tauranga, although some specialist equipment will remain there in the event the centre needs to be rebuilt.

Wildlife vet Janelle Ward says no new live oiled birds have been found in the past week.

Of the penguins, up to nine will be released back to the Bay of Plenty towards the end of the week, provided they pass waterproofing and health tests.

“We also have a number of newly washed birds that will need to work on their waterproofing over the coming days,” she says. “Eight birds are still moulting so they will stay with us until that process is complete.

“During the moult they are grumpy and antisocial, and like to hide in their burrows,” Ms Ward says. “They’re not waterproof and they don’t really eat or drink – an uncomfortable time for them. But the birds that are coming out of moult are really good with new feathers and they are swimming well.”