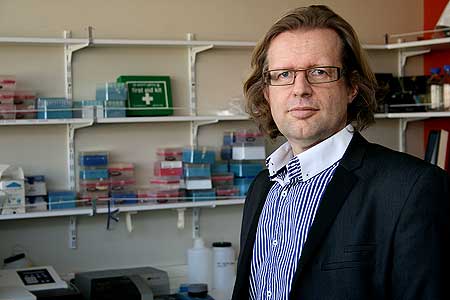 New Zealand’s first ever study of occupational dermatitis in cleaners has found rates of eczema among them nearly twice that of people not exposed to cleaning agents.

Centre for Public Health researchers from Massey University’s College of Health measured work-related skin symptoms in 425 cleaners involved in cleaning hospitals, tertiary institutions, schools, commercial buildings and the meatworks industry. Their results were compared with those of non-exposed workers from the retail and clerical sector as well as bus drivers.

Lead research investigator and centre director Professor Jeroen Douwes from Massey’s Wellington campus, says while the research focused on a non-life threatening affliction, the implications were still significant for the more than 30,000 cleaners employed in New Zealand.

“In terms of occupational disease it’s something that gets ignored because it’s not life threatening but it is more problematic than people realise and can really affect their ability to perform their jobs.”

The researchers found that of the surveyed cleaners 14.8 per cent reported experiencing eczema in the three months preceding the surveyed period, compared to 10 per cent of non-exposed workers – representing an almost two-fold increased risk of eczema. It was also more common for cleaners (17.6 per cent) to develop eczema in adult life compared to people not employed in the role (11.4 per cent).

Professor Douwes says cleaners were also more than twice as likely at 11 per cent to report having an itchy skin rash on their hands wrists and forearms compared to 5.3 per cent of the general population.

Overseas, occupational dermatitis is associated with work absenteeism, disability, increased use (and therefore increased cost) of medical care and pharmaceuticals and reduced quality of life and increased stress in individuals with these conditions.

The New Zealand research suggested that cleaners were incorrectly applying anti-dermatitis creams and aggravating existing conditions by re-using old gloves, sometimes for days on end rather than throwing them out, thus damaging the protective skin layer making it more vulnerable to chemical exposure.

In some cases the research revealed that cleaners were not even aware of the cleaning agents they were using and simply identified which was the correct one by the colour of the bottle.

Professor Douwes says workplaces had to accept responsibility for making cleaners aware of the products being used and give them more information about means available to protect their hands and forearms.

“Employers need to make available sufficient gloves and also provide creams and introduce preventative programmes to stop it [the onset of occupational dermatitis] happening in the first place,” he says.

The study was funded by the Department of Labour (now with the Ministry of Business, Innovation and Employment) and the Health Research Council of New Zealand.