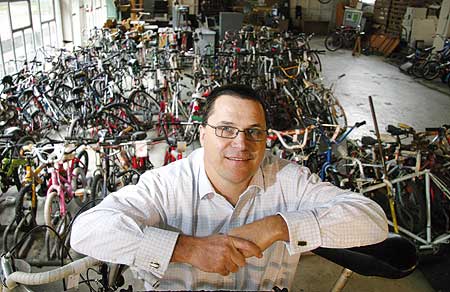 Jonathon Hannon knows what it is to get his hands dirty. A little over a decade ago he ran his own recycling business based at the Masterton dump, “among all the rats and cats and seagulls”, he says wryly.
It was not a career that enjoyed much social cachet, and you might have thought Hannon – a bright young man with a future – would have been planning his exit.
Far from it. In fact, when Hannon began studying extramurally towards the honour’s degree in applied science he now holds, it was with the intention of doing what he did better. “It was the best way I could see of developing the skills I needed and integrating them into my practices.”
Today Hannon is lodged in rat-free surrounds in the Institute of Natural Resources as the co-ordinator of the Zero Waste Academy, a partnership between Massey University, the Palmerston North City Council and the Zero Waste New Zealand Trust.
Zero waste is what it suggests: a philosophy under which products are engineered to last, rather than be used once and thrown away, and are designed with their end of life in mind, their components tailored to be reused, recycled or to biodegrade. It means waste-conscious production processes that are frugal in their employment of energy and raw material. It means, in short, a radical break with the way things are now done.
And officially New Zealand is on board: in 2002 the Government officially adopted the New Zealand Waste Strategy: Towards Zero Waste and a Sustainable New Zealand.
How wasteful are we? To take but one measure, according to the Ministry for the Environment, in 2006 New Zealanders produced 784 kilograms of solid waste per person, which, disposed of in New Zealand landfills, amounted to 3.156 million tonnes nationally.
Traditionally this mass of waste would have been seen as entailing a set of problems around land allocation – no one wants to have a dump as a neighbour – avoiding risks to human health, and minimising the environmental impact.
The concept of zero waste brings in the costs that do not usually feature in the calculus. Our current wasteful practices, says Hannon, are a result of market failure. The true costs of the air and water pollution and the carbon emissions are not carried in the price we pay for products, and consequently society fails to allocate a proper value to the gains made by practices such as recycling.
Hannon cites a study conducted by Sustainability Victoria, which found that by substituting secondary-use materials for the virgin alternative – such as waste paper for wood pulp, glass for silica sand – the state’s recycling saved enough energy to power every household in the state for eight months, enough water to fill more than 20,000 Olympic-sized swimming pools and the greenhouse gas equivalent of removing 700,000 cars from the road.
Similarly, the 329,283 tonnes of paper, plastic, card, glass, steel and aluminium collected in New Zealand through municipal recycling in 2005 represents not just space freed in a landfill, but substantial savings in energy and lower greenhouse gas emissions.
Hannon describes the uses of landfill and incineration – the current default means of waste disposal – as dirty and dumb. Why, he asks, mine raw resources at great environmental cost, when predefined commodities are available from the kerbsides, factories and transfer stations? Shouldn’t we be taking our lead from the natural world where systems are cyclical?
And recycling is only a part of what waste recovery is about, says Hannon. “Our contemporary understanding of waste recovery is not so much about recycling as it is about regulating the flow of materials and commodities through our economy.”
Hannon’s role is extraordinarily broad. At Massey he is one of a group of like-minded people (including the campus regional facilities management team, the Zero Waste Academy advisory group and the School for the Environment) collaborating towards sustainable campus management. He is a supporter of the campus-based Green Hub and its many initiatives – the e-waste collection, fluorescent light bulb recycling, the scooter-vac glass collection initiative. And as a member of the New Zealand resource sector advisory group, Hannon has been instrumental in developing a suite of 19 new national diploma and certificate qualifications (falling within the NZQA framework and administered by the New Zealand Extractive Industries Industry Training Organisation). His PhD thesis will address the value of embedding education for sustainable development in industry training more broadly.
Two new university-level papers taught at Massey, the first of which, 188.751 Advanced Waste for Sustainability, begins this year, will also bear his mark.
Hannon has many of his hopes for New Zealand’s sustainable future pinned on what will happen as the 2008 Waste Minimisation Act takes effect. “For the first time we have price-based economic instruments in place to drive strategy.”
The Act will, among other things, assist and sometimes oblige producers to take some responsibility for what happens to their products when they reach the end of their life, and it will introduce a levy on the waste disposed at landfills, providing people with an incentive to produce less waste and create a useful kitty that can be used for environmental projects. “Potentially that might raise as much as $30 million, with 50 per cent of that going back to local councils to fund improved recycling-related infrastructure and services. It’s going to be incredibly powerful,” says Hannon.
This change in economic incentives needs to be complemented by a cultural shift, says Hannon. Our throw-away consumption-without-conscience lifestyle must itself be disposed of.
A number of European countries are far more environmentally conscious than we are, says Hannon, and there is no reason we should not change the way we are accustomed to doing things. Indeed, for a while New Zealand did nurture a culture of ‘reduce, reuse and recycle’ – it was during WWII, he says.
We need to muster a similar sense of urgency. The hour demands it. “In times of crisis you manufacture the culture you need.”

Muscle, hair and skin
Acts and deeds
Apocalypse tomorrow: sustainability and industrial design
The other biofuel
A chat with the Chancellor
As long as you've got your health
A passion for dolphins
Bottle Drive
Pedal pushers