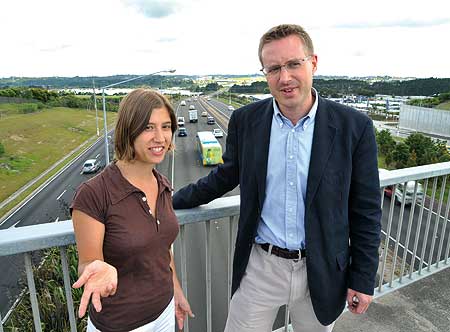 Caught up in traffic

Here is a possibly infuriating mental exercise for the next time you are stuck in traffic: see if you can disconnect and see yourself, the roading system, the mass of machinery and people going nowhere fast, in a more abstract sense. Picture yourself rising above it all, assume a Wise’s-street-map view, and picture your car as just one among the many.
From this Olympian perspective you can see traffic less as a tangle of frustrated intentions and more as a physical phenomenon: a strange substance working through a complex circulatory system. Sometimes the substance is fluid- or gas-like, sometimes it is clotted, sometimes shockwaves ripple through it, as, back at ground level, driver reacts to driver reacts to driver.
Now think about how you design such a system to get each car to its destination as swiftly and efficiently as possible.
It is a problem that has engaged civil engineers, applied mathematicians, physicists (one of the better known traffic modelling systems was designed by Los Alamos, the people who brought you the atomic bomb) and a handful of statisticians, of whom Professor Martin Hazelton is one.
Hazelton, a clean-cut Englishman who has just landed a $310,000 Marsden grant to look at transport network problems, began his career-long fascination with the subject early on: immediately after his doctorate he spent 18 months working with the transport studies unit at the University of Oxford.
What is it that appeals? The field, he says, produces some lovely quirky problems and it can be appealingly counterintuitive. For one thing, this is a realm in which the self interest of the individual – each trying to pick the quickest route – is not necessarily the best thing. In fact, if you were to empower some all-seeing traffic controller to manage matters perfectly, people would reach their destinations much more quickly. Then there is Braess’ paradox: in some cases adding extra capacity – such as another road – to a network will actually slow it down.
So far, so academic, but of course the everyday costs of the inefficiencies in our roading and transport systems are very tangible – wasted fuel, emissions such as carbon dioxide, and knock-on effects throughout the economy to name but three – and since WWII traffic modelling has become an ever more important tool.
If a public agency wants to know what will happen when it builds a bypass, adds public transport, introduces congestion charging, or provides real-time traffic information via GPS and cell phone, then it makes sense to test the what-ifs virtually first.
And the latest modelling software is capable of embracing an astonishing level of detail. TRANSIMS, the Los Alamos product, promises agent-based simulation of the second-by-second movements of every person and every vehicle through the transportation network of a large metropolitan area.
Where, then, do the difficulties lie and what does a statistician bring to the table? The problem is not so much the level of detail, Hazelton says, as it is of calibration.
“Many transportation models are very good at forecasting the past. You can tweak all of your parameters until your model perfectly predicts what happened yesterday. But if you change one of the inputs just a little bit – say a few hundred people want to go to see a sports event – everything falls over. The models can be perfectly calibrated to reproduce the past and almost completely useless at predicting the future.”
In effect, trying to make these determinist models identical to the reality they are trying to represent – a map at the same scale as the landscape – is a futile endeavour, Hazelton says. Rather, there needs to be shift away from the deceptive precision of ever more complex and determinist models towards one in which degrees of imprecision and uncertainty can be assigned values – and this is where being a statistician comes in.
“What we need is some well-founded methodology for calibrating the system, so that if we fail to perfectly reproduce reality then instead of saying ‘whoops, we got it wrong’, we say, ‘we always knew we had some random elements, and we can at least quantify how wrong we were likely to be’.
“And our forecasts aren’t going to be spot on either, but at least we are going to be pretty accurate.”
Pretty accurate would be an advance. If sometimes New Zealand’s record of traffic planning does not seem very distinguished, then others do no better. A 2005 study by Danish researchers looked at the traffic forecasting in transportation infrastructure projects, drawing on the data from 210 projects in 14 nations, their collective worth amounting to US$58 billion. In a quarter of the roading projects the traffic forecasts were more than 40 per cent out.
GDP typically devoted to transportation by developed countries: between 5 and 12 per cent
Global CO2 emissions attributable to transport: 20 per cent.
Cost of traffic congestion to the US economy in 2000:
3.6 billion vehicle-hours of delay
21.6 billion litres of wasted fuel
US$67.5 billion in lost productivity
Estimated economic, health and environmental cost of traffic congestion to the New Zealand: in excess of NZ$1 billion.

Muscle, hair and skin
Coming to a screen near you
Bookshelf - In Print April 2009
Acts and deeds

Apocalypse tomorrow: sustainability and industrial design
The other biofuel
A chat with the Chancellor
As long as you've got your health
A passion for dolphins
Bottle Drive
Pedal pushers
Waste not
Due Credit