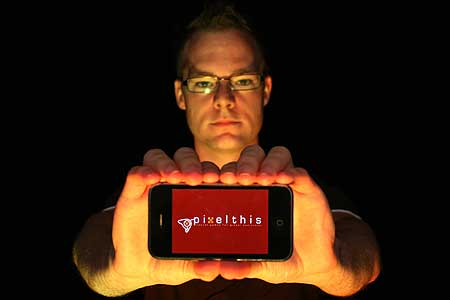 Coming to a screen near you

Peter Vullings of Pixelthis wants you to spend a lot more time on the phone. But don’t worry, it will be fun. He talks to Bryan Gibson. 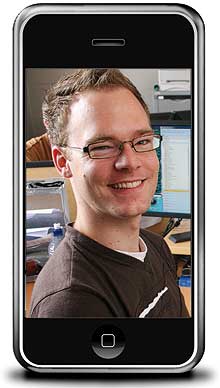 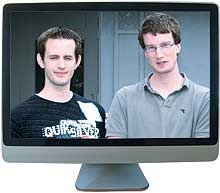 On every bus in every city it’s a common sight. Commuters passing the time engrossed, not in the passing scenery but with eyes down and fingers poised over a mobile phone. They’re not texting, but immersed in the virtual world of a game downloaded to their hand-held device from the Internet.
It’s an industry that’s growing, with 32 per cent of mobile phone users in the United States now playing these games, over 70 per cent in Japan, and a Palmerston North company is capitalising on this new growth industry.
Growing up in the 1980s Peter Vullings, like many youngsters in that decade, spent a lot of time – probably too much – in front of a Commodore 64 computer console. The simple yet engaging games captivated a generation that then progressed to Playstations and Xboxes as the years passed and the technology improved.
But it’s the simplicity of those early games that Vullings still embraces with his company Pixelthis, which after just four years is already reaching a worldwide audience. The company develops casual games for use on both desktop computers and mobile phones.
After completing a Bachelor of Technology majoring in information engineering with honours at Massey’s Manawatu campus in 2000, Vullings went to work as a web developer – and had his first taste of game development.
“We were contracted to make a game for Carlos Spencer’s website,” he says. “The problem was that the game involved kicking the rugby ball between the posts, something Carlos hadn’t been doing too well at the time, which had got him dropped from the All Blacks.”
The game never went live, but the project gave Vullings an idea. When the web development company relocated to Wellington, he stayed put and began Pixelthis. The company now employs eight staff, including two other Massey graduates.
Daniel Haselden and Mike Newton, now game developers at Pixelthis, both studied software engineering at the Manawatu campus. With Vullings and the rest of the team they now create games for a variety of platforms, including the increasingly popular iPhone. Their first game for that platform, Sheepish, has just been accepted by Apple and is now available for download.
The simple yet addictive game asks players to direct as many sheep as they can through a maze to greener pastures. It has 100 levels, giving players between 10 and 20 hours of game-play. The game costs US$3.99 to download from the iTunes site and is also available for PCs at www.planetjogo.com.If you already have iTunes installed you can click her to go direct to the game in iTunes or here to try the free "lite" version.
Sheepish is typical of the products Pixelthis is developing: simple games based on puzzles and adventure.
“Our target audience is casual gamers,” Vullings says. “These are people aged from six to 60, both male and female. They are people who don’t consider themselves ‘gamers’, and only play games if they have time, as opposed to core gamers who make time to play games. The casual gamer group is far, far larger than the core gamer group, and includes almost everybody.”
Hand-held devices call for games that use little memory, which Vullings says can pose some problems.
“One of the biggest challenges is keeping the memory footprint small,” he says. “Users don’t want a game that takes up a lot of space on their phone because then they won’t be able to fit other games and applications on it. With phones there’s no joystick or controller either, so the games need to be able to be played using the controls available, a keypad or touch-screen.”
Similarly, many players start up a game while on public transport or waiting for an appointment, so the game must be able to be played without sound and still be understandable and enjoyable. Puzzle-based games work well because they lend themselves to keypads; they’re simple to control but still engaging.
Vullings and his team hold regular brainstorming meetings to come up with new game ideas.
“We have a huge list of possibilities but sometimes it’s hard to stay ahead because there are a lot of developers out there.”
Pixelthis currently has distributors for its games in 16 countries around the world. But it’s the recent iPhone contract that has Vullings excited. At the moment his team is busy modifying its current crop of games for the Apple handset, which is quite a task.
“iPhones have no buttons, just a touch-screen, so there’s a lot of work that goes into making the games playable. Also, the games have to be developed using Apple products, which the originals weren’t developed on, so that adds to the task.”
It took 55 days for Pixelthis to be certified by Apple as a game developer for the iPhone, but Vullings says now that hurdle has been cleared subsequent games will take only two days to go from completion to the iTunes shop.
A new game Rune Mage, where players slide rune blocks around the screen to form magical pathways, is nearing completion and many more are also in production.
The company is located in the Bio Commerce Centre, which provides support for start-up technology companies. The centre also provides valuable contacts, putting the company in touch with investors and offering guidance at weekly meetings.
Vullings says he enjoys the challenge of managing the highly creative team, which works in a large, open office that promotes a low-key collaborative atmosphere.
The location, across the road from Massey’s Palmerston North campus, is ideal.
“I grew up in Waikato, but came here to study,” he says. “I met my wife at the university and she works next door as a research scientist at AgResearch. Here we have access to graduates from Massey, and as a technology company we don’t have to be physically close to our market.”
In fact, in the near future, Pixelthis hopes to find a place in the breast pockets of millions of phone users worldwide.