Writers Read: Poet of politics and Polynesia at Albany 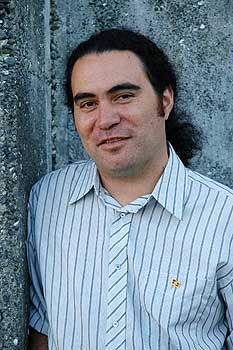 He is widely known as one of New Zealand's most vibrant and accomplished writers, having written nine books since 1990.

These include seven books of poetry – the first five published by Auckland University Press, the other two by Huia Press and Salt (UK). His book Captain Cook in the Underworld (2003) is also a libretto for a composition by John Psathas.

He’s written a graphic novel, illustrated by Chris Slane, called Maui: Legends of the Outcast; and a children’s book, Weaving Earth and Sky: Myths and Legends of Aotearoa (Random House). Both won Book of the Year and the non-fiction category in the 2003 New Zealand Post Children’s Book Awards.

His first book, Jazz Waiata, won the PEN (NZ) Best First Book of Poetry Award and he has twice been a finalist in the national New Zealand Book Awards for poetry – for Star Waka in 2000, and Captain Cook in the Underworld in 2003.

In 1998 Sullivan was the literary fellow at the University of Auckland, and in 2001 the Distinguished Visiting Writer at the University of Hawai‘i. He served a term on the UNESCO (New Zealand) Culture Subcommission, and a term on Creative New Zealand’s Literature Advisory Committee. He has performed his poetry at many festivals and literary events within New Zealand, Canada, Hawai‘i and Germany. He also co-edits the online journal Trout and is a featured author at the New Zealand Electronic Poetry Centre.

“He's a very warm and genial speaker, and I think anyone who comes along will be more than entertained,” says Dr Jack Ross, poet and English senior lecturer in the School of English and Media Studies at the Albany campus.

Sullivan will read from and discuss his recent creative work, followed by a brief question and answer session from 12-1pm in the Study Centre Staff Lounge. The event is free and open to the public. For more information click here.