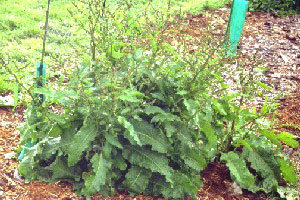 There are a number of different dock species that grow within New Zealand, but broad-leaved dock would be the most common of these. So when people say they have problems with docks, they are usually referring to broad-leaved dock. It is a perennial weed which has a large tap-root system. It can vary in size quite considerably, sometimes surviving in regularly mown lawns by producing small, prostrate leaves, but usually growing quite large in pastures and waste areas, out-competing surrounding plants by covering them with its broad leaves. It generally has a growing point at ground level from which is produces its large leaves, but every spring it forms an upright stem on which it forms fruits which start out green, turn red and eventually become dark brown as they dry out. The seeds produced by docks each year are long-lived, so huge banks of dock seeds can build up within the soil. When dock-infested paddocks get cultivated, the soil is soon reinfested by docks, both from seedlings and also because the tap-roots are seldom killed by cultivation and so regrow, as shown in recent research we conducted. The foliage of docks contains tannins which makes them somewhat unpalatable to some livestock, especially cattle and horses. Sheep will generally eat docks unless they are too large and dense, but cows aren’t keen on them, so docks can become quite a problem on dairy farms. Docks are more tolerant of poorly drained soil than many other plant species, so are often found growing prolifically in low-lying parts of paddocks. It has sometimes been claimed that differing densities of broad-leaved dock can act as indicators of other soil parameters, but we found poor correlations between differing dock densities and most soil parameters when we investigated these claims.

The leaf shape of some of the more common Rumex weeds are shown on the right. The docks are closely related to sheep's sorrel, which is also grouped in the Rumex genus. Another common dock found in pastures and waste areas is clustered dock, which tends to have a narrower leaf than broad-leafed dock. The broad-leaved dock leaf is usually wider near the base than near the tip, whereas clustered dock has less of a change in width from one end of the leaf to the other. Fiddle dock gets its name from being shaped like a fiddle or violin, so is easier to differentiate from broad-leaved dock. As with many weeds, the leaves that grow from the base of the plant are better for telling the docks apart than those up the flower stems, which aren’t always the typical shape. The fruits of docks, once they have matured, are about 2-3 mm across and are often also used to tell dock species apart. In the photo below, you can see that broad-leaved dock fruits tend to each have three "wings" with jagged edges, unlike clustered dock fruits. There are three equal-sized inflated "bladders" on the fruits of clustered dock, whereas broad-leaved dock has one large bladder and two smaller ones for each fruit. 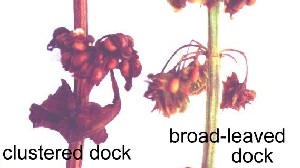 Docks as a group are quite difficult to kill. They have a moderate tolerance of most herbicides, and glyphosate needs to be applied at a fairly high rate when controlling docks in waste areas or when spraying out pastures during seed-bed preparation. A common recommendation now when spraying out pastures is to add thifensulfuron (eg Harmony) to the glyphosate to give better control of the docks without needing to apply such high rates of glyphosate.  Glyphosate is recommended not to be applied while the plant has a seed-head. For selective control of docks in pastures, the hormone herbicides such as 2,4-D and MCPA are ineffective at controlling established plants. For many years, the standard recommendation in pastures has been to apply asulam (Asulox or Dockstar). Recently, another treatment has become available, namely thifensulfuron, which tends to be cheaper than asulam. Both herbicides should be applied in spring while docks are actively growing but before seed-head formation has begun. Both of them will cause temporary suppression of pasture growth after application due to a severe check of clover growth, and both may require a follow-up application for well-established dock plants. Another possibility is to spot-spray in pastures with aminopyralid (T-Max). If pastures have bad dock problems, it might be best to spray them out with a glyphosate/thifensulfuron mix, resow the pasture then treat new seedlings of docks with a flumetsulam/bentazone mix (Dynamo) while small, though other options in new pastures are an MCPB/bentazone mix (eg Pulsar, PastureGuard Elite, Quasar) or 2,4-DB. In turf, a triclopyr/picloram mix (eg Victory Gold) will give good control. In orchards, either use asulam to spot-spray docks, or add fluroxypyr (eg Solstar) or saflufenacil (Sharpen) to glyphosate to improve the control by the glyphosate.