As with gorse, broom is another very troublesome scrub weed from the legume family. It isn’t spiny like gorse, and so is slightly easier to get stock to feed on it and near it. However it can become dense just like gorse, making access to pasture difficult or impossible for stock. It tolerates cold conditions well, so is more troublesome than gorse above 300 m elevation and also in some southern districts. It also causes problems in forestry. Note that some people in New Zealand are now starting to call this weed Scotch broom, a term used in many other parts of the world for this species, and to help differentiate it from other broom species in New Zealand such as Montpellier broom.  It is considered one of the most troublesome weed species in our forestry industry.  Broom can build up very high seed densities in the soil, with figures in some of our research getting as high as 36,000 seeds per square metre of soil in pine forests.  The seed is long-lived, so these sorts of densities still exist when one crop of trees is harvested, ready to germinate when the next crop is planted, after which it causes severe competition during the first 10 years of the life of a forest. Broom has pliable, ridged green stems which may have small leaves, but can also be leafless. It has yellow flowers and seed pods similar to gorse. It can be confused with Montpellier broom, which is more leafy, has smaller flowers (9 - 13 mm long compared with 16 - 25 mm long in broom) and smaller seed pods.  Broom can grow 3 m tall in forestry situations.

As with many scrub weeds, broom soon regrows from dormant buds on stumps if shrubs are cut with chain saws or slashers without prior herbicide treatment. Regrowth from buds can also occur after fires. Many herbicides are not very effective on broom because of the lack of leaves which help prevent absorption of herbicides, so rates may need to be increased, surfactants used or application needs to occur at the correct time of the year (see herbicide labels). Triclopyr (eg Grazon, Brushoff) or picloram + triclopyr (eg Conquest, Eliminate Brushkiller) are effective herbicides for controlling broom, and are probably the best options for spot-applications in pastures so that grasses won’t be destroyed (though clovers will be killed). 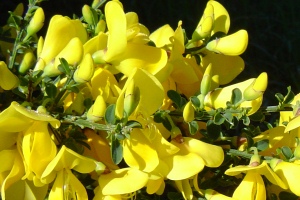 However it is also susceptible to glyphosate (eg Roundup) and metsulfuron (eg Eradicate 600, Agpro Meturon), so the common glyphosate/metsulfuron mix used for clearing land prior to planting forests is suitable. In newly established pine forests, our research has shown that selective residual herbicides such as hexazinone or terbuthylazine are effective on it, giving good knockdown of seedlings, or else it can be tackled with mixes of triclopyr and clopyralid, or clopyralid + triclopyr + picloram + aminopyralid.  Probably the best long-term strategy is to establish a Yorkshire fog ground cover between trees, then use one of these latter two mixtures to remove broom that has established.  Once the grass is dense enough, it will prevent further establishment of broom seedlings.  As can be seen with results from another trial we conducted, high rates of clopyralid will help the Yorkshire fog to stop broom germinating for many months after application. It is also grazed by goats in pasture situations. A biological control programme on broom has so far released five insect species. You can find out more about the biological control agents that have been released for the control of broom. You can also read more about the biology and control of broom.