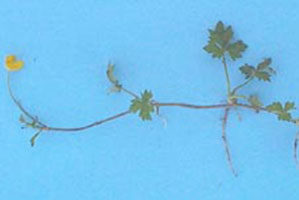 Buttercup species are tolerant of wet soil conditions, and so are often found in soils that are poorly drained. Creeping buttercup is the only buttercup species commonly found in New Zealand which has a stolon system. As with white clover, the stolon system allows creeping buttercup to spread laterally quite quickly into nearby weed-free areas. It is frequently found in poorly drained lawns, pastures, waste areas and orchards, and also sometimes in crops and gardens. It often becomes quite troublesome in pastures grazed by cattle or horses, as they tend to avoid grazing the weed, unlike sheep. 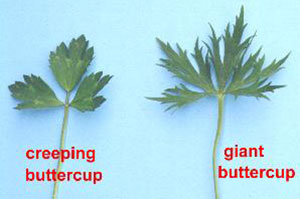 As with white clover, the leaves of creeping buttercup are composed of three leaflets, though these leaflets are much different in shape to those of clovers (see picture). The central leaflet tends to have a longer stalk than the other two leaflets, whereas the leaf of giant buttercup (another very common buttercup) does not have leaves divided up in this way. Although the stolons are a distinguishing feature of creeping buttercup, they often disappear over winter making creeping buttercup difficult to differentiate from a very similar looking annual weed called hairy buttercup. In spring and summer, it has the typical buttercup flower with shiny yellow petals. Creeping buttercup is commonly found in the herbicide strips of orchards and in waste places because it is tolerant of amitrole, simazine and low rates of glyphosate, all chemicals commonly used in orchards and waste places. Its growth form makes it tolerant of mowing too, so it grows in the mown grass strips between rows of trees, and grows laterally into the sprayed strip, as does white clover. Rates of glufosinate or glyphosate that are not too low can give reasonable control in orchards, as can residual herbicides based around diuron. In pastures, either MCPA or flumetsulam can be used to remove it, and most turf herbicides kill it successfully in lawns, especially those based on MCPA.  In recent research conducted at Massey University, we found that simply ploughing a paddock with no use of herbicide to regrass a paddock does not kill this species very well at all.  Even after secondary cultivation to prepare a good seed-bed, buttercup leaves are often the first foliage that pop up in the new pasture from old stolons that haven’t died, and creeping buttercup will be worse in a new pasture than the former pasture following regrassing without herbicide assistance.  So use of reasonable rates of glyphosate to assist with killing the old pasture will help prevent this happening, and MCPB or flumetsulam in the new pastures will kill off seedlings before they get too established and set up the next population of creeping buttercup.