Fathen (pronounced fat-hen) is one of the most competitive cropping weeds in New Zealand, and was formerly classed within the Chenopodiaceae family. It is a summer annual, which means it germinates only in spring or early summer, produces seeds over summer and autumn, and dies off with frosts in late autumn. The main time for germination is mid spring. Fathen is generally not found over winter, though a closely related species, nettle-leaved fathen (Chenopodium murale) does seem to tolerate cooler conditions better. It is generally sensitive to most herbicides and so is relatively easy to control. However a herbicide-resistant biotype of fathen has developed in maize fields in Waikato and some other areas, plants of which are resistant to atrazine and some other commonly used herbicides from the triazine family, as discussed further below.  Fathen was the first weed to develop resistance to herbicides within New Zealand. 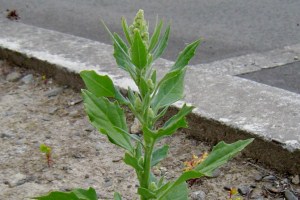 Fathen is a tall, upright, leafy plant. Foliage often looks like it has been sprinkled with flour, especially younger leaves and the flowering parts, which are similar in colour to the foliage, ie a whitish-green colour. Fathen can vary greatly in size, sometimes flowering when only a few centimetres high, especially in autumn if it established late, while in other situations it can reach 2 m in height.  Leaf shape can vary quite a bit from having almost no teeth along their margin to having quite jagged margins.  Those that are most jagged along the margins are often actually nettle-leaved fathen, as suggested by its name. Fathen is generally an easy species to control, being susceptible to cultivation and most herbicides. However, as mentioned earlier, a resistant biotype now exists which can't be controlled in crops such as maize with atrazine or closely related triazine herbicides such as cyanazine, terbuthylazine or simazine. Other herbicides are available to kill this resistant biotype, with dicamba having been commonly used in this role. Recently though, triazine-resistant biotypes of fathen have been found in Waikato maize fields which have also developed resistance to dicamba because this herbicide has been used for so many years in succession to remove triazine-resistant fathen.  So growers are currently using herbicides such as mesotrione, topramezone and saflufenacil to remove fathen with resistance to atrazine and dicamba within maize crops. Our research conducted at Massey University has shown the multiple resistant fathen plants do grow less aggressively though so are more susceptible to crop competition.  Other research we have done has shown that dicamba-resistant fathen is also resistant to clopyralid and aminopyralid.