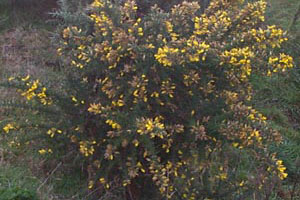 Gorse is considered by many to be New Zealand’s worst scrub weed. It was originally introduced to New Zealand as a hedge species, but now occupies large areas of hill-country, reducing the area available for grazing by livestock on pasture land. It also causes severe competition with young forest trees, and makes access to forests difficult for pruning and thinning operations. Over summer, foliage of gorse can become quite dry, making gorse stands susceptible to fire. This creates risks of damage to forests and also houses in areas such as Wellington situated close to stands of gorse. Large quantities of seeds with tough outer coats are formed by gorse each year, allowing the species to re-establish quickly once a fire has been through a stand. Gorse does so well in New Zealand that it flowers twice a year, unlike in Europe from where it originates.  However, some people consider gorse to have its uses, as it can act as a nursery plant to allow native trees to get established, and it does stop steep hillsides from eroding by covering them in dense vegetation. 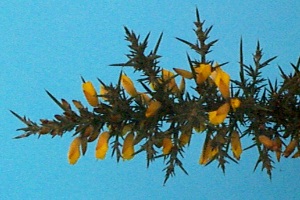 The "leaves" of gorse take the form of sharp spines, which make it difficult to confuse with most other weed species. From a distance, it may be confused with broom, which also has yellow flowers like gorse, making whole hill-sides appear yellow at some times of the year. Note that young seedlings of gorse initially have more conventional leaves, which are trifoliate (3 leaflets) much like many other legumes.

As with many scrub weeds, gorse soon regrows from dormant buds on stumps if shrubs are cut with chain saws or slashers without prior herbicide treatment. Regrowth from buds can also occur after fires. Many herbicides are not very effective on gorse because of the shape of the "leaves" and the thick cuticles on the spines which help prevent absorption of herbicides. However gorse can be killed using such herbicides as triclopyr (eg Grazon), picloram + triclopyr (eg Conquest) and metsulfuron (eg Agpro Meturon). If a new pasture is established following spraying out 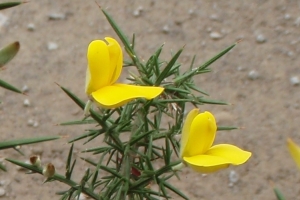 the gorse, it is important to have sufficient fencing in the paddock to ensure seedlings are grazed out while they are still palatable and before they become spiny.  Goats will graze gorse and can kill it. There is an active biological control programme on gorse, and so far about seven different species have been released in New Zealand to feed on this weed. Hopefully these will eventually make gorse less aggressive though the insects have not provided much reduction in gorse infestations to date. Find out more about the biological control agents that have been released for the control of gorse. Also there is an AgPest page about the biology and control of gorse.