Narrow-leaved plantain is a very common perennial weed found in many lawns and pastures, and often in waste places as well. It is typically found in "run-down" pastures which do not have much grass and clover in them. It doesn't cause any harm, and is actually eaten by livestock and thus is quite useful. However, pastures with more narrow-leaved plantain than grass in the past have usually been low-producing pastures, and so was often a sign that the pasture needed replacing, though as discussed below, this is changing. The plantains are often lumped in with dandelion and weeds similar to this species and all called "flat-weeds". As with all these species, it tolerates low fertility conditions well. However a weed is a plant growing where it’s not wanted, interfering with human activities.  The tolerance that narrow-leaved plantain has of low fertility plus its palatability to livestock has resulted in release of a number of cultivars of narrow-leaved plantain (eg Agritonic) for inclusion into pasture mixes, initially for organic farming systems where species may need to tolerate low fertiliser inputs, but now also for high levels of animal production and also for its role in reducing nitrate leaching from animals grazing on it. These improved cultivars are often simply called plantain. Our research has shown it has higher concentrations of certain minerals such as copper and zinc than ryegrass or clover.  Thus there can be some debate over whether this is really a weed in pastures at all, though the improved cultivars are much more productive than the fairly low-producing weedy type, so the unimproved plants are often considered as weeds in the improved plantain pastures. Certainly in lawns though, it has no useful features and generally creates an eye-sore. 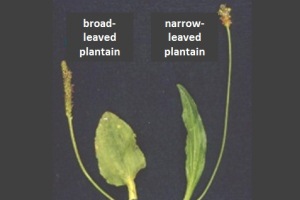 Plantains are susceptible to many hormone herbicides such as 2,4-D, mecoprop and MCPA, making them easy to remove selectively from turf. Dicamba used by itself tends not to be very effective, and clopyralid (eg Versatill) needs to be applied at higher rates to get good control. Aminopyralid (T-Max) is also poor on it, but this makes it a useful herbicide for spot-spraying thistles in pastures in which the improved cultivars of narrow-leaved plantain have been planted.  Flumetsulam (eg Preside) has little effect on narrow-leaved plantain either, so is often used to control certain weed species in pastures with a clover/plantain sward.  Note though that in research we undertook recently on herbicides to use in new plantain/clover/chicory mixes that we found flumetsulam can give plantain seedlings quite a check in growth initially.  We are currently undertaking research to determine how to control weeds in pastures based on plantain, clover and ryegrass.  In pastures, if you did want to kill narrow-leaved plantain then MCPA could be used to control it, but if you are spraying just to get rid of narrow-leaved plantain, you need to ask yourself why you are doing this. In waste areas, narrow-leaved plantain shows some tolerance to low rates of glyphosate. In orchards, it is resistant to diuron.