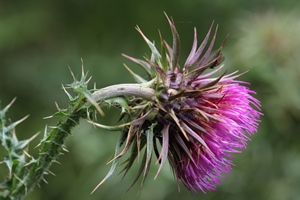 Nodding thistle is one of the most competitive thistle species causing problems in New Zealand pastures. It is known as musk thistle is some countries overseas. The species gets the name "nodding thistle" because of the large seed-heads which "nod" over due to their weight, ie they tend not to stick totally upright on the ends of the stem. Nodding thistle is a biennial weed, typically establishing in autumn in pastures that have been damaged by drought over summer. In autumn with the first substantial rainfalls, as there is bare soil, due to the summer pasture damage, and moisture from the rainfall, the seedlings are able to establish successfully. They generally remain vegetative as rosettes for well over a year, and flowering occurs in the second spring after establishment. In New Zealand, nodding thistle is not yet found in every part of the country, but is common in Waikato, Bay of Plenty, Hawkes Bay, Canterbury and Otago. Nodding thistle is often listed as a Pest Plant by Regional Councils in areas where nodding thistle is still only just establishing, making it a legal requirement to control it. 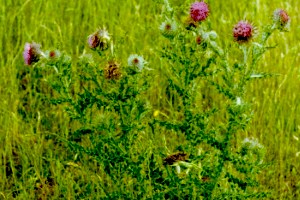 Nodding thistle can be distinguished from Scotch thistle at the vegetative stage, as Scotch thistle has spines on both the upper leaf surface and the leaf margins, whereas nodding thistle only has spines around the margins. It can be a bit difficult to distinguish from Californian thistle rosettes, though the latter tend to grow in clusters due to being connected underground by creeping roots. Winged thistle and slender winged thistle rosettes often have a bit more white streaking along veins than nodding thistle, though nodding thistle can have whitish leaf margins at times, as shown in the image below. Variegated thistle has much more white streaking in the leaves than any of these thistles. Once flowering occurs, confusion between the thistles is less likely. Nodding thistle has a much larger seed-head than most other thistle species, apart from variegated thistle, and this latter thistle can always be differentiated by its white venation. As mentioned above, nodding thistle usually has its flower heads nodding over somewhat, especially the more mature ones. The one species that is quite difficult to tell apart from nodding thistle is plumeless thistle, which is quite common in the Waikato region.  The rosette looks identical but the flowers are slightly smaller and don't nod over. 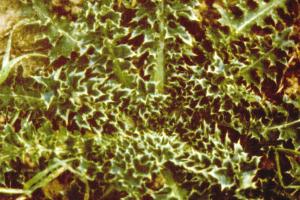 Phenoxy herbicides are typically used to control nodding thistle selectively in pasture. If they are sprayed young enough, MCPB can be used to control the seedlings without any damage to pasture. Once rosettes get older, MCPA or 2,4-D will be needed, and these can cause suppression of clover growth following spraying. In some parts of the country, our research has found there are phenoxy-resistant biotypes of nodding thistle have developed, meaning that MCPB, MCPA and 2,4-D all are ineffective on these thistles. As part of our current research at Massey University, we are interested in locating populations of nodding thistle with herbicide resistance, so please do contact us if you have resistant populations as we would like to obtain seed samples from these plants.  If resistant plants are present, a small amount of clopyralid (eg Versatill) will need to be mixed with MCPA or 2,4-D, but this will cause much more damage to clover and so should only be added if resistance is definitely present. Another option is to wait till seed-head elongation ("bolting") occurs and to use a weed wiper to apply clopyralid or glyphosate before the first seeds are formed. If there are only a few plants present, they can be killed by "grubbing", using a hoe to chop the thistle 2-3 cm beneath ground level so that all dormant buds are removed from the crown. If they are cut at ground level, enough of the crown will remain to allow regrowth to occur. Thistle germination in autumn should be minimised by trying to keep the pasture competitive at this time, not over-grazing in summer and introducing drought-tolerant pasture species such as cocksfoot and phalaris. Several biological control agents have been released in New Zealand to attack this species, though generally they have not had a major impact on this weed. Goats will eat the weed once it is growing taller than surrounding vegetation. AgPest have more on the biology and control of nodding thistle.