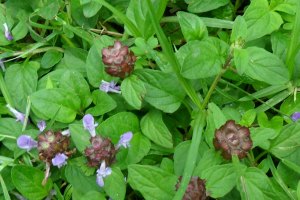 Selfheal is a perennial weed normally found in turf, though it can grow up to 30 cm tall if left unmown in waste areas. It is typically found in moist to wet lawns, but can also tolerate dryness. Selfheal has a creeping stem which allows it to form dense mats within lawns. Its tolerance of many selective turf herbicides also helps to make it a problem weed. Although considered as a curse by most people striving for a weed-free lawn, selfheal is considered to have many herbal properties, which is probably how it got introduced to New Zealand in the first place. As suggested by its name, it has been claimed to have properties which allow people to "heal themselves," being originally used to treat external wounds, and nowadays used for helping heal bruises and an infusion is taken by some people to heal a number of ailments. There are even some people who claim it can inhibit the HIV virus. Being a mere weed scientist, I shall simply tell you how to kill it and you can make up your own mind whether you want to swallow a plant full of chemicals for which little or no toxicity data is available. 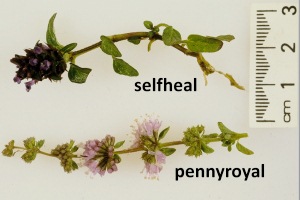 Selfheal forms large patches of dark green leaves within turf, made up of creeping stems that have roots holding them to the soil, and leaves in opposite pairs along these stems. The leaves tend to be slightly larger in size than those of pennyroyal, another member of the Lamiaceae family often found forming dense mats in moist lawns. When the leaves of pennyroyal are crushed, a strong mint smell is given off, which doesn't happen with selfheal. Once selfheal begins flowering in spring, it is less likely to be confused with too many other New Zealand turf weeds. It has quite large flower heads at the end of each stem, which are composed of successive layers of dark blue flowers forming on top of each other. Once flowering has finished, the seed-head goes brown. In contrast, pennyroyal has its flowers at the base of leaves, rather than at the ends of stems. 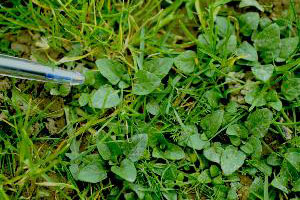 Selfheal is not an easy weed to control selectively in turf. It appears to regrow successfully following applications of MCPA, 2,4-D, clopyralid or triclopyr when used by themselves. A dicamba/2,4-D mixture is the most common recommendation for this species, applied at flowering in spring while the soil is still moist. It doesn't always give 100% control, but is better than most other treatments. A triclopyr/picloram mixture (eg Victory Gold) will also give reasonable control, though this is one of the few broad-leaved turf weeds which will often regrow following treatment with this mixture.