Sheep's sorrel currently has a botanical name of Rumex acetosella though at times it has been known as Acetosa acetosella.  It has a creeping root system, which is very similar to a rhizome system. However, it is not stem material as with rhizomes, and so does not have buds at regular intervals along its length, though any fragment of it is capable of forming a new plant. Sheep's sorrel is often found in flower gardens, crops, pastures and lawns. However it seldom causes major problems in New Zealand as it is not a very competitive weed. It can be an eye-sore in gardens though, and its seed is difficult to remove from harvested white clover seed. It can be poisonous to livestock, but animals seldom eat enough to be affected. Sheep's sorrel can tolerate dry acidic conditions better than many other species. Each sheep's sorrel plant is composed of a clump of arrow-shaped leaves growing as a rosette, which are joined underground by a creeping root system. In spring, each rosette forms a reddish upright flower stem.  The seed-head looks like a miniature form of a broad-leaved dock seed-head which is hardly surprising as the two species are closely related.  As sheep’s sorrel plants grow in patches due to the creeping root system, these patches often appear reddish from a distance in spring because of these seed-heads, which are usually only about 20 cm tall.  Complete road-sides can look reddish because of this. 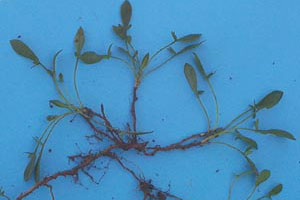 As with most perennial weeds, translocated herbicides are the best way to kill sheep's sorrel. Due to its small size and because it is not very competitive, it is more susceptible to strong competition from pastures and turf than many other weeds, especially if lime is used to keep the soil from getting too acidic.  But under acidic dry conditions, sheep’s sorrel can grow more strongly than most pasture species and this is when it dominates.  As with the closely related docks, sheep’s sorrel is not controlled that well even by the translocated herbicides.  It is not controlled by 2,4-D or any of the herbicides that can be safely boom-sprayed selectively over pastures, so the main option available in pastures is to spot-spray with a triclopyr/picloram mix or a 2,4-D/dicamba mix.  If spraying out pastures, glyphosate is not that great at killing it so it would pay to add something like tribenuron or dicamba to the glyphosate.  In turf, the triclopyr/picloram mix would probably be the best option for commercial green-keepers, and the 2,4-D/dicamba mix for home-gardeners.