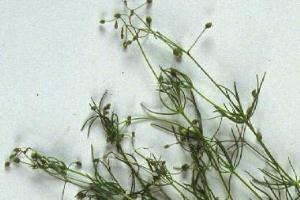 Spurrey is an annual weed, often establishing in autumn and flowering in spring. However, it can also establish in spring. Although not a large weed, it can grow densely, causing competition with crop seedlings. It can also cause problems in young turf and establishing pastures, smothering emerging seedlings. It has seeds which can remain viable within the soil for many years. A paddock in which no spurrey has been seen for many years can suddenly become infested following ploughing, bringing the seed up from deeper down. Spurrey grows particularly well under acidic soil conditions and can be a bit difficult to remove due to tolerance of some herbicides.  In some parts of the country, farmers refer to spurrey as yarr. 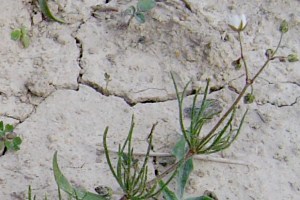 Spurrey has sprawling stems, and leaves are very narrow structures which are gathered in clusters along the stem. This characteristic plant form make it unlikely to be confused with most other weeds, except perhaps procumbent pearlwort which is much smaller and forms stoloniferous mats mainly in gardens and nurseries. Spurrey has small white flowers which are clustered at the ends of stems.  When it first establishes within new turf or pasture, it can be easy not to spot the problem because the small needle-like leaves look very much like new grass seedlings until you look more closely and see how they are clustered along the stems.  Some pastures can end up looking white from a distance when there is a bad infestation of spurrey once it all starts flowering. A look-alike plant occasionally found around the country is sand spurrey, though the leaves tend to be a bit shorter than for spurrey, there is a small papery sheath beneath each cluster of leaves not found in spurrey, and flowers are purplish pink rather than white. One aspect of spurrey which can cause problems is its tolerance of hormone herbicides such as MCPB and MCPA which would normally be used to remove it from young pastures or turf. Bentazone (eg Basagran, and also a component in MCPB/bentazone mixes such as Pulsar) is a suitable product for removing it from either young turf or pastures. Another option for young pastures is flumetsulam (eg Preside). Note that both bentazone and flumetsulam should be applied while the spurrey is young, because it becomes more tolerant once it moves out of the seedling stage.  Another option in young turf is the mecoprop/ioxynil/bromoxynil mixture (eg Image).  Once pastures and turf are well established, the spurrey usually cannot establish from seed due to competition. In crops, most of the normal selective herbicides will control this weed.  For example, in forage brassicas where spurrey can sometimes be a problem, aminopyralid (T-Max) gives good control.  Ensuring soil acidity is not too low by applying lime can help discourage spurrey too.