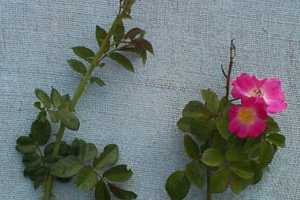 Sweet brier (also spelt sweet briar in many places) was originally grown as an ornamental rose, but is now a major scrub weed in the South Island, especially in Central Otago and inland Canterbury. It is also found in the North Island, though generally only as a road-side weed. It grows in tussock grassland and poor pastures where stony ground and light rain (often only 400 mm per year) limits competing growth. Pasture competition prevents new plants from establishing, though established plants are very competitive. Rabbit infestations have helped the spread of sweet brier by reducing pasture vigour. Cattle, possums and birds spread the seed by eating the fruits ("rose hips") produced around the seeds. 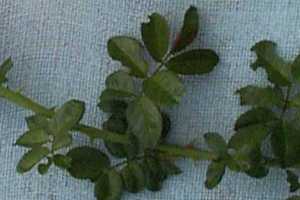 Sweet brier looks very much like a scrambling miniature rose, because this is basically what it is. Flowers are smaller than most cultivated roses, and are pink. The woody stems have many spines, some straight and some pointing downwards. Flowering occurs in summer and the pink fruits are ripe by early winter. Leaves are composed of leaflets in a similar way to blackberry, but leaflets are spread down a stem, rather than radiating out from a central point as in blackberry.  There are also other species from the Rosa genus other than Rosa rubiginosa that have escaped into the wild, due to the growing of so many ornamental species from this genus throughout the country, and most have similar leaf shapes and some are also called sweet brier. 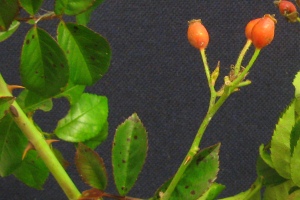 Most scrub weeds can be prevented from establishing in pastures if the pastures are competitive and, as mentioned above, sweet brier is probably more susceptible to competition than some scrub species. However sweet brier causes problems where it is difficult to get competitive growth from pastures. Once it is present, use of goats can bring it under control. Herbicides that will control it are metsulfuron, glyphosate and a triclopyr + picloram mixture. However the economics of doing this in central South Island pastures is one of the main issues to consider, especially if more sweet brier will establish soon after control due to low vigour of pastures.