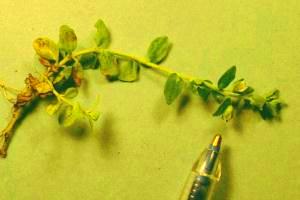 As suggested by its name, turf speedwell is a weed of turf, though it can be found in pastures as well. As with all of the speedwells, it was recently moved from the Scrophulariaceae family to Plantaginaceae.  Turf speedwell is a perennial weed which has stolons that allow it to creep along the ground below the blades of the mower. When compared with the size of a pen (see top photo), you can see that it is quite a small, inconspicuous weed. However, it can form quite dense mats within turf, which are not quite so inconspicuous. It is also tolerant of many commonly used turf herbicides, so it becomes more conspicuous after spraying it with the wrong herbicide as it is one of the few weeds left in the turf. The little white flowers which appear on the ends of the stems also help people notice it within turf. Turf speedwell is very common within New Zealand, and seems to do best under moist conditions. 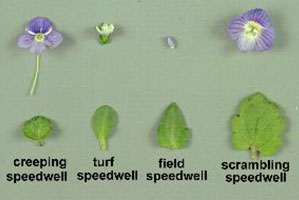 As mentioned above, the speedwells can be troublesome in turf because they are tolerant of most herbicides used selectively on lawns. They tolerate almost all hormone herbicides (MCPA, 2,4-D, clopyralid, dicamba, triclopyr, picloram), and speedwells are about the only weeds which survive a triclopyr/picloram mixture (eg Victory Gold). Turf speedwell is best controlled using a mixture of mecoprop and ioxynil, which is available in Image. This should be applied in spring or autumn, and may need to be applied again 6 months later to give total control of turf speedwell. Diflufenican (eg Quantum) is a cereal herbicide that gives good control of speedwells, and is now sold in New Zealand for turf weed control in mixtures marketed as Agpro Fairway and Bow & Arrow NZ.