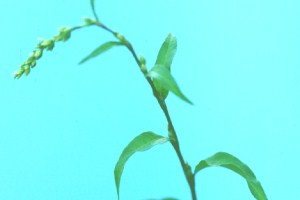 Water pepper (formerly known as Polygonum hydropiper) is a summer annual which is often found growing in pastures, especially along streams and other wet places. The foliage is quite acrid, which is presumably how it gets its name and livestock appear to dislike eating it because of this. As a result, it will usually remain ungrazed in pasture areas. Often when people say they have willow weed growing in their pastures, they actually have water pepper. As it is an annual, it presumably establishes each spring in parts of the pasture where grass growth has been knocked back by pugging damage in wet areas. It can also sometimes be found in damp waste areas and crops. The best way to differentiate water pepper from willow weed is when they are flowering. The flowering parts of water pepper are not as distinctly pink as willow weed, being pale pink to whitish and often have quite a greenish tinge to them. Also the fruits are not as tightly clumped together on the end of the stem, but more spread out. Compare the flowering parts shown on this page with those on the page dedicated to willow weed. The leaves of water pepper tend not to have such a distinct black marking on them which is more pronounced in willow weed. Both plants have a papery membrane (“ochrea”) at the base of each leaf (see lower photo), a characteristic of many Polygonaceae plants. Controlling water pepper selectively in pastures can be quite difficult to achieve. The main key to successful control is to spray the plants while they are still young. Very young seedlings are more susceptible to 2,4-DB than MCPB. As the seedlings get more advanced, 2,4-D will be needed to control them, which is more effective than MCPA. Once the plants become more mature, 2,4-D is not that effective.  Another option is to use thifensulfuron (eg Harmony), which is a bit more effective than 2,4-D. Most farmers don’t try sorting out water pepper until it is quite large, by which time probably the best option is an aminopyralid/triclopyr mix (Tordon PastureBoss).  However, this will remove clovers, so it would be better to attack it much earlier with 2,4-D. Generally paddocks with water pepper have the weed establish in the same areas each year, so if farmers feel that spraying the weeds can be justified, then they should look at spraying in early to mid-spring while the plants are small. Also try to avoid pugging occurring in the affected areas over winter and early spring, though this is often very difficult to achieve.