Wild radish is mainly a weed of waste places and disturbed habitats in New Zealand. It grows as an annual or biennial, and is often mistaken for wild turnip, which is the main reason for including it on this web-site so students who need to learn how to identify wild turnip can compare it with wild radish. In Australia, wild radish is a major weed species causing competition in canola crops, which are grown over large areas of that country. Presumably it could also cause problems in brassica crops within New Zealand, but generally does not seem to grow as commonly as wild turnip in many parts of New Zealand at present. Evidently some people make use of wild radish as a salad plant  though it does have the potential to cause nitrate poisoning if eaten by livestock in farming situations. 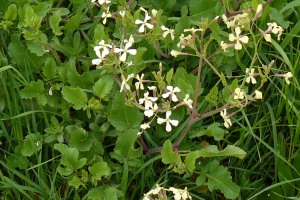 Wild radish is like wild turnip in that it starts out as a rosette of hairy leaves, with each leaf heavily lobed. However, when stem elongation occurs to form an upright flower stem about 1 m tall, the stems and leaves remain bristly hairy, whereas in wild turnip the leaves are smooth. The flowers in wild radish vary in colour due to genetic variability, but have four petals each and are usually pale yellow or white, and always with distinct purplish veins, unlike wild turnip in which the petals are a brighter yellow and lacking the veins. It forms large seed pods like wild turnip, though in wild radish, as the pods mature, they become very constricted about each seed, eventually breaking into sections later once they fall off. In waste areas, wild radish can be easily controlled by herbicides such as glyphosate, amitrole, MCPA and 2,4-D. Herbicides used selectively in brassica crops are obviously not going to be effective, such as trifluralin, aminopyralid (T-Max), clopyralid and low rates of dicamba.  In areas where brassica crops need to be planted and wild radish may be an issue, herbicide tolerant cultivars might be the answer so that chlorsulfuron can be used.