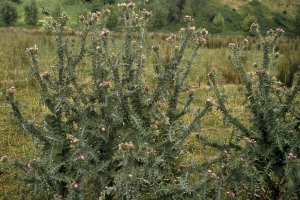 Winged thistle is a winter annual, which means it generally establishes from seed in autumn, grows as a typical thistle rosette over winter, then develops an upright flower stem in spring, from which seed is produced and falls into the soil where it spends summer. Thus the plants are usually dead through late summer, unlike biennial weeds like Scotch thistle and nodding thistle, or the perennial species, Californian thistle, which all have some plants present through summer. Because of this, winged thistles are well suited to pastures that are prone to drying out in summer, and need pasture density to be sparse during autumn from summer dryness so that the seedlings can establish. Winged thistle looks and behaves very similarly to slender winged thistle (Carduus pycnocephalus), so the two species are commonly confused with each other. Slender winged thistle is more tolerant of dry conditions than winged thistle, and is often the more common of the two species in eastern parts of New Zealand such as Hawkes Bay. Winged thistle is found throughout New Zealand, though evidently not in Westland. 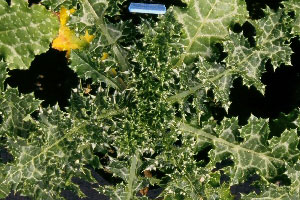 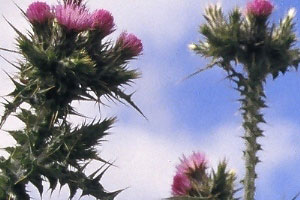 If possible, try to have pastures dense in autumn to stop seedlings establishing, perhaps through use of drought-tolerant pasture species, and not overgrazing through summer by using supplementary feed. If densities are low, winged thistle can be removed using a chipping hoe, cutting about 1-2 cm below the crown of the thistle to ensure no buds are left attached to the root. Herbicides are best applied while the thistle is still a young rosette as it tends to be less susceptible as it becomes reproductive. MCPB can be used on young rosettes, or else 2,4-D or MCPA on older plants. In parts of Hawkes Bay, we have found populations of slender winged thistle that have developed resistance to MCPB, MCPA and 2,4-D, but we don’t think this has happened in winged thistle. In flat paddocks, use of a weed wiper may be an option after stem elongation has occurred in spring but before seeds have formed, using a translocated herbicide like glyphosate to move into the forming seeds and prevent healthy seeds from being put back into the soil. Spot-spraying is another option for flowering plants, using herbicides such as aminopyralid (T-Max), 2,4-D/dicamba, clopyralid or triclopyr/picloram.  Please contact us if you think you have herbicide resistance in either winged or slender winged thistle as we are looking for populations to study.