The NZBRC aims to advance the understanding of biochar for mitigating global climate change and to enable its use in New Zealand, particularly by agricultural and forestry sectors. 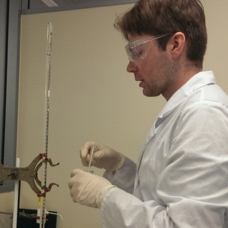 Mr Stanislav Garbuz, from the Dokuchaev Soil Science Institute (Moscow, Russia) is spending two months (March-April 2016) at the NZ Biochar Research Centre of the Soil & Earth Sciences Department. Stanislav has a master’s degree from the Lomonosow Moscow State University (2009) and is a fellow of the New Zealand Soil Science Society. Stanislav will be collaborating in experiments related to carbon sequestration in soil, with special attention to the fractionation of soil C in pastoral soils and the response of soils to management practices in pastoral allophanic soils of New Zealand. Associate Professor Marta Camps has been a member of the Intergovernmental Technical Panel on Soils (2013-2015) and a member of the Board of Directors of the International Biochar Initiative (2011-2015; Vice-Chair 2014; Chair 2015). Marta studied agricultural engineering at the Universitat Politècnica de Catalunya (Lleida, Spain) and then received her MSc and PhD in soil science from the University of California, Davis. Prior to working at Massey University, she was a senior researcher - “Ramon y Cajal” (2003-2008) at NEIKER (Spain) and lecturer (1999-2003) at the Universidade de Santiago de Compostela (Spain).