A European/New Zealand collaboration has resulted in a theory around the physical characteristics of Chladni solitons, proposing experiments to observe them in ultra-cold atomic superfluids. Chladni solitons made of vortex lines in a superfluid.

The work, between Professor Joachim Brand from Massey’s New Zealand Institute for Advanced Study and Antonio Muñoz Mateo from the University of Barcelona resulted in the paper:  Chladni solitons and the onset of the snaking instability for dark solitons in confined superfluids published in Physical Review Letters.

“Similar to musical instruments, superfluid defects can resonate at characteristic frequencies that produce intriguing patterns,” says Professor Brand. “The explanation of this phenomenon goes back to the eighteenth century, when Ernst Chladni observed grains of sand assemble in geometric patterns on the surface of a plate excited to characteristic tones with a bow.”

The lines of sand, now called Chladni figures, trace the nodal lines of vibration modes. In a similar fashion to Chladni’s plates, a standing wave in a confined superfluid (called a dark soliton) possesses characteristic vibration modes with geometric patterns of nodal lines.

“Being unstable vibrations, the dark soliton decays leaving behind a skeleton of vortex lines that make up solitary waves themselves. The two simplest structures, a single vortex line called solitonic vortex, and a vortex ring have already been observed in quantum gases.”

Work Professor Brand completed over ten years ago with William P. Reinhardt from the University of Washington originally predicted solitonic vortices. But they have only just been observed recently.

“Solitonic vortices and vortex rings are just two members of a whole family of standing waves, the Chladni solitons. This work is aiming to observe these standing waves and learn more about their characteristics.”

The particle-like dynamics of these guided solitary waves provides potentially profitable features for their implementation in atomtronic circuits, and play a key role in the generation of metastable loop currents. 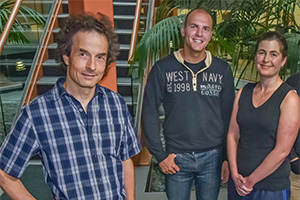