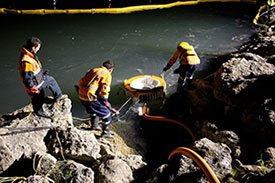 A spill in Napier Harbour affected a number of penguins in September.

Although not on the same scale as the Rena, the diesel spill from the fishing vessel Mutiara II on September 7 still put local wildlife at risk, again mainly the little blue penguin population.

Hawke’s Bay Regional Council staff were quick to deploy booms and contain the spill to a corner of the inner harbour. The response team then worked through the night using skimmers to collect the diesel.

As night fell it became clear that the habitat of a small number of little blue penguins had been impacted. Some returning to their burrows were seen swimming through the slick, which prompted the mobilisation of Rod Dickson, the Hawke’s Bay Regional Council Oiled Wildlife Response Rep.

Rod conducted wildlife surveys on Friday, Saturday and Sunday nights with the assistance of John Adams from the Department of Conservation (not to mention the unsolicited encouragement from local party goers from across the road!). During this time a total of six penguins were caught and inspected for contamination. Three birds which showed evidence of contamination were held in captivity and were stabilised over the weekend by Linda Hayes, a local Hawke’s Bay vet.

The three affected birds were then driven to Massey University in Palmerston North where they have been treated by Wildbase staff at the specialised oiled wildlife response facility. Here birds were stabilised for the first few days before being washed. Following this they have embarked on a period of rehabilitation – consisting mainly of quality time in the rehabilitation pools where they have completely regained their waterproofing. All three penguins were given a clean bill of health from Wildbase staff on the 25th of September and were returned to Napier for release back to the wild the following day.