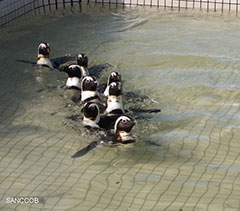 It has been three years, but a wreck off the coast of South Africa has still not been completely cleared, with an oil slick causing ongoing issues for local wildlife.

The SELI 1 was a Turkish bulk carrier en-route to Gibraltar with 30,000 tonnes of coal, 660 tonnes of heavy fuel oil and 60 tonnes of diesel onboard. The saga of the SELI 1 began in September 2009 when engine failure and strong winds caused it to ground off Cape Town, South Africa. Salvage efforts were delayed and the ship was severely damaged by storms.

In June 2010 salvage was further hampered when a fire broke out onboard. The fire, which gutted the bridge and living quarters, was caused by oxy-acetylene cutting torches in use by the salvage crew. In the three years since it’s grounding, most of the coal and oil have been removed from the SELI 1. However, an unknown volume of fuel remains onboard and recent rough seas have meant that the wreck has now broken into three sections.

The South African seabird rescue and rehabilitation organisation, SANCCOB, is currently responding to oiled African penguins following the further disintegration of the SELI 1 wreck in early September: a major oil slick has extended into Table Bay, a major feeding ground for local sea birds. This spill is so far responsible for the largest number of oil impacted birds at any one time in the history of the wreck. So far the endangered African penguin is the hardest hit with 219 oiled adults having been collected mainly from Robben Island since the 1st September. 33 penguin chicks have also been admitted to care following their parents becoming oiled.

SANCCOB is urging the authorities to remove the SELI 1 wreck completely; the South African government is currently considering the options.