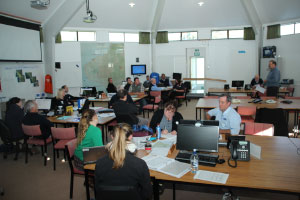 The Taranaki Coastline features rocky shores and sandy beaches and numerous sites of local and regional significance both culturally and environmentally. The region is home to a range of unique habitats and ecological niches that provide refuge for a variety of wildlife species including the New Zealand fur seal, little blue penguins, threatened and migratory sea birds and esturine species such as banded dotterels.

The Taranaki region is also home to New Zealand’s most active oil and gas programme. For this reason it’s a great place to put into practise an oil spill exercise to identify key lessons for potential oil spills in the region. The Wildbase Oil Response team was recently invited to attend and contribute to such an exercise.

On Thursday 15th May 2014 an oil spill exercise was conducted at the Taranaki Emergency Management Office in New Plymouth. There were about 20 participants led by members of the Taranaki Regional Council and coordinated by the Regional On Scene Commander, Bruce Pope. Participants included regional council staff, industry staff, an Iwi representative and Wildbase staff.

Opunake Beach is located on the southwest coast of Taranaki about 45 kilometres southwest of New Plymouth. It is a popular tourist spot and considered to be high in significance for recreational, cultural/historical and ecological values.

The scenario was that unidentified oil was reported within the 12 km inclusion zone offshore and that it was anticipated to come ashore at Opunake Beach and potentially surrounding sensitive site areas. The focus of the exercise was to simulate a Tier 2 response as part of the Incident Command Centre (ICC).

After a morning briefing participants were split into funtions within the ICC including Admin/Logistics, Planning and Intelligence, Operations, Media and Wildlife. The various functions set about their tasks as various information was fed into the exercise. Eventually the spill was categorised as a Tier 3 response so included the establishment of a wildlife facility for oiled birds and activation of the National Oiled Wildlife Response Team (NOWRT) led by the Wildbase Oil Response team from Massey University.

For the purpose of the exercise, the Wildlife Team was coordinated by Shell employee Samantha Mortensen, Taranaki’s wildlife advisor on the National Oiled Wildlife Response Team (NOWRT). Other wildlife team members included Tui Wright,  Taranaki Regional Council’s representative on the NOWRT and Wildbase Oil Response staff Bridey White and Graeme Finlayson. One of the key learnings for the wildlife team was reaffirmation that wildlife response should integrate into all of the functions of the oil spill response. It was a fantastic learning experience for everyone and great to work with the Taranaki members of the NOWRT.

Overall, the feedback from the exercise from all participants was really positive and provided Wildbase staff with an excellent learning and networking experience.