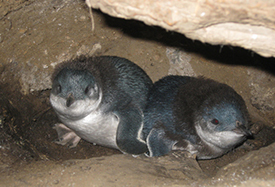 Master of Conservation Biology  student Karin Sievwright has been observing  the survival and breeding success of little blue penguins (Eudyptula minor) affected by the C/V Rena oil spill in the Bay of Plenty two years ago.  All 365 rehabilitated penguins, as well as 350 un-oiled (control) penguins were microchipped to allow for identification of individual birds in the wild.

A second season of monitoring is currently underway. A number of control and rehabilitated pairs lost their first clutch of eggs due to predation, abandonment or failure to hatch. However, the majority of these pairs successfully re-laid and have managed to produce chicks. Further data analyses will indicate whether or not the reduced productivity observed in the first post-spill breeding season has persisted into the second season.